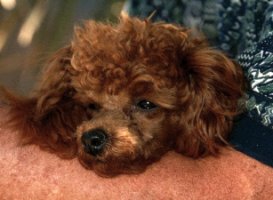 Known as one of the most easily recognizable and popular dogs in the world, few can resist the cuteness factor of the Poodle puppy. Poodles have long enjoyed ranking amongst the most popular breeds of dog due to their unique appearance, high intelligence, loyalty, and their non-shedding coat. The Toy Poodle is no exception to the rule – while he may be the smallest of all the Poodle dogs, he’s big on heart and has plenty of love to go around!

Believed to have originated in Germany, prior to the 15th century, the Poodle was originally known as the Pudel, or by the name “Canis Familiaris Aquatius.” It is believed that the Poodle developed as a water spaniel dog and was later mixed with Russian dogs to create the basis of the breed. He would first become standardized in France, where they would adopt him as the national dog, but the name “Poodle” is, in fact, an English term, taken from the German term pudel or pudelin, which meant for one to splash in the water. This was one of the things that Poodles do best.

Well known for his skills in the water, the Poodle was one of the ultimate water retrievers and a very popular duck hunting dog in his time. Despite many believing the dogs are cut in frivolous styles, according to some strange dog-related fashion trends, the original Poodle cuts were designed to lighten the dog’s overall body weight, grant him buoyancy, and protect him from debris in the water, while still giving protection to the dog’s joints from the cold waters they retrieved game from.

The smaller variety of Poodles would come to be, relatively soon after the Standard Poodle was recognized, although the smaller varieties were more favored as pets and truffle-hunting dogs. Smaller and more lightly built, they would do less damage to the delicate truffles than their larger counterparts, and so the Miniature poodles were employed for the purpose of scenting out and then digging up the edible fungus; in fact, many claim that terriers were crossed with the Poodle, specifically in the hopes of breeding a better truffle-hunting dog.

The smallest of the three varieties of Poodle, the Toy Poodle or Petit Barbet, as he would later be called, was created solely for the purpose of being a pampered little puppy for the royal courts of the day. Interesting to note is that the breeding of these smaller dogs was never documented, so it remains a mystery as to whether or not the smaller versions were simply bred-down versions of the Standard Poodle, or if they were 3 separate and unique breeds with a common ancestor – the world may never know. Regardless of which size variation you choose, the Poodle is a very square, compact, and sturdily-built dog. Designed as a water-based retriever, he is muscular without being bulky and streamlined without being frail. The overall appearance of this dog is very balanced and geometrical; attesting to his great athletic ability.

The eyes of the Poodle are intelligent and dark in color, somewhat oval in shape and set far apart on his head, coupled with a gently tapering muzzle to give these dogs a delicate and beautiful profile that is unique to the breed. While the dog’s straight topline is often hidden by their abundant coat, they are very elegant and straight-backed, with a short loin, well sprung ribs and strong hips, which taper off to tiny, yet efficient paws.

Poodles are only found in solid colors, such as black, grey, brown, silver, cafe-au-lait, apricot, cream and white. Any parti-colored dog is considered mismarked, which is disqualifiable and unregisterable.

The Poodle is a very proud and noble dog and is well-known for carrying himself thusly. Very active and intelligent, they are keen canines who tend to consider themselves top dog. While they can get along well with children and other pets that they are raised with, they are originally bred as hunting dogs, so should be watched with birds and smaller animals. On the whole, however, the Poodle is a very attentive animal who seeks to please his human and keep everyone happy.

A high-spirited and active dog, the Poodle is one who likes to stay busy. While he does not require a home in the country, he is still perfectly at home in those surroundings and, if confined to city life, will undoubtedly drag his owner out for numerous walks or trips to the dog park on a daily basis. Due to their intelligence and activity levels, they are ideal animals for obedience events and canine obstacle courses.

The Princess of Primp, the Poodle is perhaps one of the most elaborately clipped dogs in the world. Whether clipped or unclipped, they possess a curly coat that will grow in tight ringlets if left unattended. Of course, most people will tell you half the fun of having a poodle is the coiffed appearance of this pampered pooch. What few realize, however, is that there is more than one way to powder-puff your Poodle:

The Puppy Clip: If under a year in age, the Poodle is often shown in what is known as the “puppy clip.” In this clip, the face, throat, feet, and the base of the Poodle’s tail are shaved and the rest of the coat is left long, save for a pompon on the end of the dog’s tail.

The English Saddle: Clipping the face, throat, forelegs, feet and base of the tail, the Poodle is left with puffs of hair on the forelegs and a pompon on his tail. A short blanketing of hair is left over the hindquarters, save for a curved shaved area on each flank and two bands shaved into each hind leg. The rest of the coat may be left long.

The Continental: When clipping a Poodle in a “Continental” style, the face, throat, feet, and the base of the Poodle’s tail are shaved, as are the hindquarters. Optional pompons may be left on the hips, but the legs are always shaved with puffs on the front legs and bracelets on the hind and the dog sports a pompon on the end of his tail, as well.

Sporting: The Poodle that is clipped in a “Sporting” style has his face, throat, feet and the base of his tail shaved, but the top of his head is scissor-cut into a simple cap. The remainder of the body is either clipped or scissor-cut to a length of no more than an inch, following the lines of the dog’s body. As always, the Poodle’s tail sports a pompon at the end.

The Poodle is an incredibly intelligent breed and one that desires to please his owner. For these reasons, he is generally very easy to train and receptive to the praises that he receives for good behavior. It is said that the Poodle is the quickest breed to catch on to verbal commands and that he is capable of understanding short sentence commands.

Obedience classes are highly recommended if you are inexperienced with training dogs – not only does it teach your dog basic commands and obedience, but it also teaches you how better to understand your new Poodle puppy, and what methods he bests responds to. In no time, you two are sure to be teaching one another new tricks.

Like any breed of dog, the Poodle is subject to a variety of health concerns. Your best bet is, when deciding to choose a new Poodle puppy, check around with several breeders and ask about the various health issues that can affect these beautiful little dogs. A reputable breeder should be well-versed in the health concerns and should be able to give you more details, as well as showing you the sire and dam of your potential puppy. Some of the health problems that can affect Poodles include:

The Poodle is a very intelligent and alert individual that requires a great deal of care and attention. Not only does his coat require regular trips to the groomer and a daily brushing, but he is a very social individual who prefers to think of himself as a “people” and entitled to the same privileges and attention. If you don’t mind a lot of exercise and you have the time (or money) to take him to the groomer’s regularly, you may find that this wonderfully intelligent dog is the perfect pet for you.