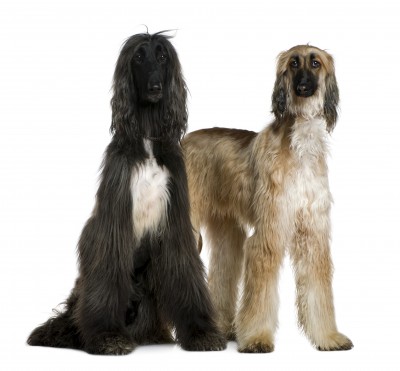 All About Afghan Hound Dogs and Puppies

When it comes to glamour, the Afghan Hound has it in spades.

Afghan Hounds are a large dog breed with a very distinctive appearance and temperament. 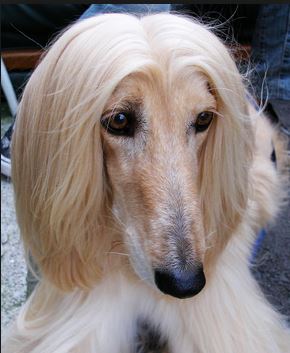 Credit with the development of this fine and noble hound goes to the country of Afghanistan, though popular belief suggests that the Afghan Hound may have existed for thousands of years in the lands of Egypt. Another theory is that this elegant sighthound got his start on the steppes of Asia, where he might have evolved from an ancient sighthound in that territory.

Regardless of speculation and despite a lot of research going into these different theories, neither one has ever been proven and so, to date, it is generally acknowledged that this magnificent dog was developed in Afghanistan and surrounding countries, somewhere around the 19th century.

Created for the purpose of coursing game, the Afghan hound was not just a pretty face, back in the day. Used to hunt everything from common hares to the elusive snow leopard, Afghan Hounds were prized for their surefootedness, swiftness and their courage, as well as their beauty.

Capable of being hunted singly or in pairs or packs, the Afghan Hound was a formidable hunter, capable of bringing down large game with ease and yet these powerful dogs were almost wiped out during WWI.

Miss Jean C. Manson and the couple, Major and Mrs. G. Bell Murray, are responsible for reintroducing the Afghan hound to the Western world. Having just returned to Scotland after an 80-year trip to Baluchistan (now known as Pakistan), they brought with them a group of Afghans that they had both acquired and bred during their stay. Today, a majority of the modern Afghan Hounds can be traced back to dogs of their lineage. 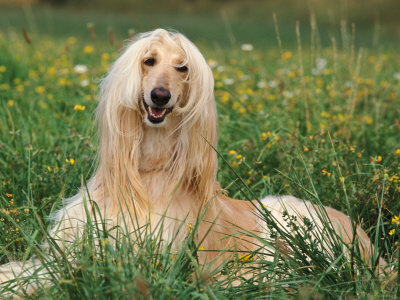 The Afghan Hound has a distinct look that’s all his own. The head is refined and beautiful with what is known as a level mouth (where the teeth match up evenly – a challenge if you are planning to breed these beauties!). They stand an average of 24-28 inches at the shoulder and usually weigh between 50-60 pounds as adults. All colors are allowed in this breed but white markings, particularly on the head, are frowned upon.

The Afghan hound’s signature is his long and silky coat, a sharp contrast to the short hair that is found on their heads, tails, and along the saddle. The rest of their coat is long and silky, with good feathering and density. The Afghan Hound is to be shown in his natural state, without being trimmed or clipped, and the head is shown sporting an elegant topknot with no other adornments.

The Afghan Hound is the epitome` of aristocratic elegance and every aspect of the breed reflects this. Tending to be rather aloof and withdrawn, they are prone to preferring to remain apart from the crowd and can be somewhat shy at times.

While very loyal, they would still rather watch the Christmas party from under the table than get up and get involved with all the noisy relatives – your best bet is to provide your Afghan Hound with a quite retreat that he can go to, when things prove to be too loud and boisterous.

Despite what the movies might suggest, the Afghan Hound is not ideally suited for New York apartments or cramped quarters. In order to maintain a healthy standard of living, these large and powerful dogs need to have room where they can stretch their legs and run – a natural love of staying active being bred into these wonderful canines. If the Afghan Hound does not have access to a fenced in back yard, then he should be taken for several half-hour walks, daily.

In order to prevent snarls and mats, the Afghan Hound requires a daily comb-through to keep his beautiful coat long, elegant and silky. Bathing should be done when necessary, though it’s not uncommon for show animals to get a bath every week or alternating weeks. Dependent on your dog and how often he likes to get dirty, you’re sure to work out a routine that works best for you.

Many people liken Afghan Hounds to cats, meaning that they are notoriously aloof, independent and can be very stubborn to train. If an Afghan Hound doesn’t feel like learning something, you’re going to have your hands full, attempting to teach him this. Not above simply walking off in the middle of the lesson, training an Afghan puppy takes patience and persistence. 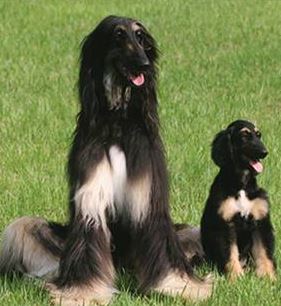 Like any breed of dog, the Afghan Hound is subject to a variety of health concerns. Your best bet is, when deciding to choose a new Afghan Hound puppy, check around with several breeders and ask about the various health issues that can affect these beautiful little dogs.

A reputable breeder should be well-versed in the health concerns and should be able to give you more details, as well as showing you the sire and dam of your potential puppy. Some of the health problems that can affect Afghan Hounds include:

Is an Afghan Hound Right For You?

The Afghan Hound is not for the person who wants a loving and loyal, devoted lapdog. In fact, many people liken these beautiful canines to cats, due to their aloof and often arrogant natures. Those who appreciate the breed do so for their intelligence, their beauty and their independence.

If, however, you want a dog who doesn’t desire being underfoot all the time and you don’t mind the daily brushing, the Afghan Hound is a very elegant and intriguing individual to spend living quarters with!