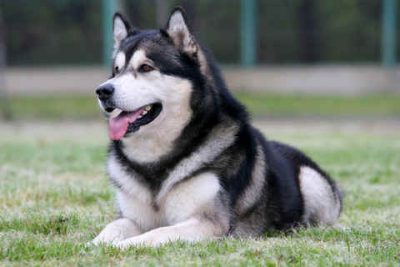 Since ancient times, the Alaskan Malamute dog has been an invaluable friend and aid to inhabitants of the arctic regions of North America.

A powerful member of the Spitz family, the Alaskan Malamute was named after an Inuit tribe, the Mahlemut. Renowned for being the legendary freighting dog of polar expeditions, the breed also served the military with valor in both World Wars. A cold weather breed, the Malamute has adapted well to warmer climates. 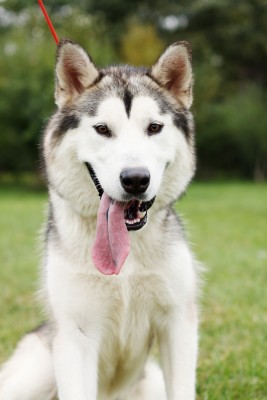 From the cold arctic regions, the Alaskan Malamute dog breed has evolved over the centuries; a hearty breed that is renowned for it’s strength, endurance, intelligence, and ability to withstand the extremely cold temperatures in which it has developed.

Although the Alaskan Malamute’s exact origin is uncertain, these big, beautiful dogs were first known as canine companions of the native Inuit people known as the Mahlemuts, from the Northern Sound area of Alaska’s northwest coast.

These dogs were originally used as hunting dogs and hauling dogs, helping native hunters in their quest for seals, big game and even polar bears. This versatile breed had the endurance and strength to help the hunters bring in their game, and then haul it back to the village where it was shared among the tribes people, both human and canine.

In the early days of the breed, the Alaskan Malamute was both big and strong, enabling it to do the work of many smaller, less able dogs. Alaskan Malamute dogs were treated as members of the tribe; highly valued and appreciated – but never spoiled or coddled – since Alaskan Malamutes, by necessity, had to be tough as nails.

Around the 1700’s this area was discovered by outside explorers, who were impressed by both the dogs, and the esteem in which their owners held them, and the cooperative relationship between arctic man and dog.

The late 1800’s brought scores of outsiders to Alaska, in search of gold, adventure and refuge. With little else to entertain them in the cold northern region, these settlers began staging weight pulling contests and races among local dogs, interbreeding the Alaskan Malamutes with other breeds in an attempt to add speed to the existing dogs incredible heartiness and strength. This development threatened to eradicate the pure Alaskan Malamute in favor of a hybrid dog breed of their making. 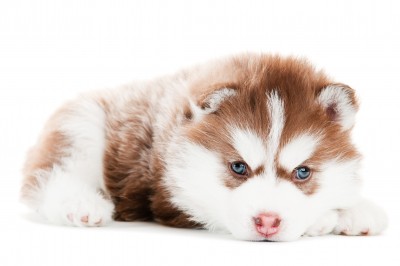 Males stand about 25 inches at the shoulder and weigh approximately 85 pounds; females are usually two inches and 10 pounds less. Malamutes sport a coat that is light grey to black in color with white markings.

The Malamute’s beautiful coat is dense and well-suited to protect him from the harsh Arctic winds and, while it comes in a wide variety of colors, the only solid shade that is recognized is pure white. Their almost wolf-like appearances endear them in the hearts of many, as well as the proud way that this dog has of carrying himself – they are truly a beauty to behold, even if they are not bred to be just another pretty face.

Alaskan Malamutes are self-confident, strong-willed, affectionate and friendly. They are not suitable for guard work, although their size and appearance alone will usually discourage intruders. Malamutes are patient with children but, like all large dogs, should be supervised during play.

While the Alaskan Malamute is bred as a powerful workhorse of a dog, he is extremely loving and very gentle. Treating him with a kind hand and lavishing lots of praise upon him are sure to win his devotion, and you’re sure to be enchanted by his outgoing, playful nature. The Malamute is a definite heart-stealer – there is no avoiding this; you have but to meet one and you’ll fall in love. 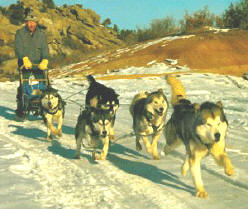 It’s important to remember that the Alaskan Malamute was bred as a working dog and, for this reason, isn’t prone to playing the role of couch potato. While they are content to snuggle up in a small apartment (and will happily share even the smallest of beds with his human), the Alaskan Malamute still needs plenty of exercise in order to burn off excess energy.

This can be accomplished by letting him run, supervised, in a fenced-in back yard, taking him for several good walks every day, or regular trips to the dog park.

Without proper exercise, your Malamute puppy may quickly outweigh a horse, not to mention the risk of his developing bad habits or turning to destructive behavior as a means of appeasing his boredom.

Alaskan Malamutes have a very thick, double coat that helps keep them warm in extremely cold temperatures. Owners should give their Alaskan Malamute a good brushing a couple times a week to get rid of stray hairs and dirt.

Alaskan Malamutes tend to shed seasonally, so during these times you’ll need to give your dog a good going-over with a shedding blade, in addition to the regular weekly brushing duties.

Other than brushing, your Alaskan Malamute will require little in the way of grooming. 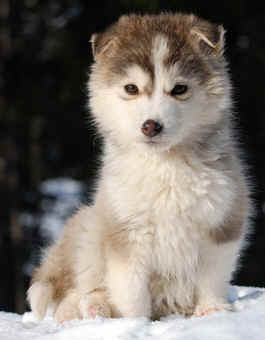 The Malamute is a very quick-witted dog that loves to be challenged and delights in learning new things. Training bouts should vary, so as to keep your Alaskan Malamute puppy from growing bored and one shouldn’t be afraid to try teaching your puppy in ways that make him think.

Alaskan Malamute puppies benefit from puppy school, as well as basic obedience courses and you will be thankful, later on, when your Malamute puppy turns into 100 pounds of happy energy.

The basic commands are a necessity, though he will delight in things such as obstacle events and skills that will give him a chance to put his natural abilities to work.

Like any breed of dog, the Alaskan Malamute is subject to a variety of health concerns. Your best bet is, when deciding to choose a new Alaskan Malamute puppy, check around with several breeders and ask about the various health issues that can affect these beautiful dogs.

A reputable breeder should be well-versed in the health concerns and should be able to give you more details, as well as showing you the sire and dam of your potential puppy. Some of the health problems that can affect Alaskan Malamutes include:

Is an Alaskan Malamute Right For You?

Beautiful and noble, many are captivated by the grace and strength of the Alaskan Malamute breed. Still others are frequently moved by his wolfish appearance, and some choose Alaskan Malamute puppies for their versatility and loyalty.

Whatever the reason for considering getting an Alaskan Malamute puppy, it’s important to realize that this breed can be a lot of work. Requiring a great deal of exercise and brushing, they are not the ideal dog for someone with a very busy lifestyle, and it’s important to note that they grow very lonely and mournful if left on their own too much.

Alaskan Malamutes can make wonderful family pets, however. The key to this is early socialization with children and animals, while your dog is still a puppy, and to always supervise your Alaskan Malamute when small children are about.

Be sure to introduce him to other pets and family members gradually and be wary of any dogs showing any hint of aggression. Taking the extra time and effort with this breed will ensure that you have a lasting friend for many years to come.