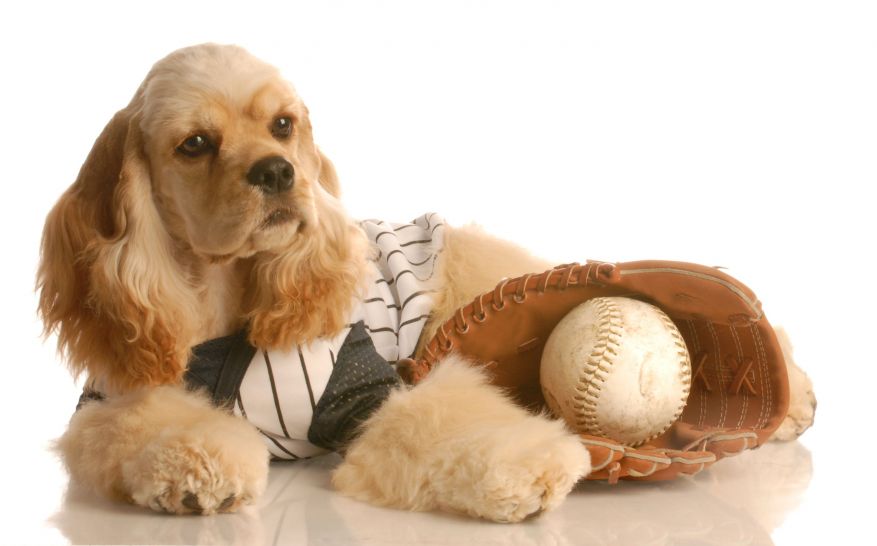 The Cocker Spaniel has long been favored as a family pet, not only in the country of its origins, but also throughout the world. Known for his beautiful coat, soft brown eyes and sweet expression, he is surprisingly much more than a simple pampered pet. In addition to his place at his mistress’ side, he is equally at home with his master, out hunting in the fields. The smallest of the sporting breeds, the Cocker Spaniel is as versatile as he is loveable.

The first Cocker Spaniel is believed to have made his debut on American soil with the landing of the Mayflower, back in 1620. Sadly, there are no ways of directly tracing the lineage of the modern day Cocker Spaniel back to this dog, however; due to the fact that there were no pedigrees or stud books back in those days, any written reference has been obliterated by the passing of time. The first actual registrations of the American Cocker Spaniel began in 1879, with a liver and white dog who was affectionately known as “Captain.” From there, this wonderful dog began to gain more and more recognition until he was practically made a household name.

Interesting to note is that, while the breed originated over in England, the American Spaniel Club was the first to take interest in the Cocker Spaniel as a breed all its own. During this time, back in their home country, spaniels were simply divided according to size – dogs that were more than 28 pounds were to be considered Field or Springer Spaniels, whereas smaller dogs would be considered Cocker Spaniels – thus named because of their usefulness when it came to shooting woodcocks. In 1946, however, the American Cocker Spaniel (also called the American Spaniel) would be recognized as a completely separate breed from its English Brothers.

The Cocker Spaniel is a beautiful dog – a combination of grace, pride, and athletic ability, they are versatile dogs and it shows in their very appearance. While their coats are worn in a fashion that is long and flowing, the Cocker Spaniel is a muscled and athletic dog, highly capable of spending long hours in the field while hunting. His eyes are forward set, large and soft looking, coupled with the dog’s highly domed forehead to give him a look of solemn and kind intelligence, and the American Spaniel’s tail is docked at an early age. Interesting to note is that, while they originated in England, the American Spaniel’s development has created a different size, type, and coloration from what is now known as the English Cocker Spaniel.

The American Cocker Spaniel comes in a wide variety of colors, appropriately broken down into the following categories – the black variety, any solid color other than black (ASCOB), parti-color variety, tan pointed, and roans. The most common varieties tend to be solid blacks, solid goldens, and the black-and-white parti-color. Needless to say, there is probably a Cocker Spaniel out there, that’s just the right shade for you.

The Cocker Spaniel is of a gentle and willing disposition, always eager to please his owner. While they aren’t considered to be one of the brightest dogs, they tend to be very determined and can excel both in obedience and in the field, as a hunter and retriever of birds. When teaching your Cocker Spaniel puppy, remember to be patient and consistent, as these are dogs who learn from repetition and routine. Don’t get frustrated, should you have to show him a few times before he catches on.

The Cocker Spaniel is bred for work in the field and, for this reason, he does need his exercise. Failing to provide him with adequate room to romp and play can lead to obesity or, if left alone for too long, the Cocker Spaniel may turn to destructive behavior. Ideally, Cocker Spaniel owners should have a large fenced in yard, or be prepared to make frequent trips down to the dog park so he can play a few rousing games of fetch. While they can adapt to apartment living, keeping a Cocker Spaniel will mean frequent walks and, even more important, the necessity of a leash – due to the fact that they are hunting dogs, Cocker Spaniels can be prone to wandering away or bolting after things.

Compared to some of the other breeds, the Cocker Spaniel desires a fair amount of maintenance, if you plan on keeping him looking pretty. Long waves of silky hair cover his body and should be trimmed in order to keep him neat, in addition to requiring frequent brushing to prevent mats. Many keep their Cocker Spaniels clipped short, especially during hot weather, but this will still mean regular trips to the groomer.

In addition to his coat, the Cocker Spaniel’s ears are so thick and heavy that they frequently need to be cleaned and checked for signs of infection. This is important to do on a weekly basis, and perhaps even more often if your dog is one that likes to swim or get into any situation where he may get moisture in his ears. Light-colored dogs can also be prone to rust-colored stains from their eyes, though this is easily maintained with special bathing products.

Cocker Spaniels are very intelligent and are relatively easy to train, provided that early and consistent training is provided.

Like any breed of dog, the purebred Cocker Spaniel is subject to a variety of health concerns. For this reason, when deciding to choose a new American Spaniel puppy, check around with several breeders and ask about the various health issues that can affect these beautiful dogs. A reputable breeder should be well-versed in the health concerns and should be able to give you more details, as well as showing you the sire and dam of your potential puppy. Some of the health problems that can affect Cocker Spaniels include:

Is an American Cocker Spaniel Right For You?

The Cocker Spaniel is a wonderful family pet, but he is a pet that takes a fair amount of attention, in order to keep him happy and healthy. Requiring regular exercise and frequent trips to the groomers may put the brakes on would-be owners, as well as the knowledge that Cocker Spaniels are notorious for “dribbling” or having little accidents with their bladders when they get too excited. If you can get past those small hurdles and still want one of these sweet and loving dogs, an American Spaniel may very well be the right dog for you. Be sure to check out several breeders and get to know some of them in person before you make any final decisions but, for the right family, the American Cocker Spaniel is the perfect dog.