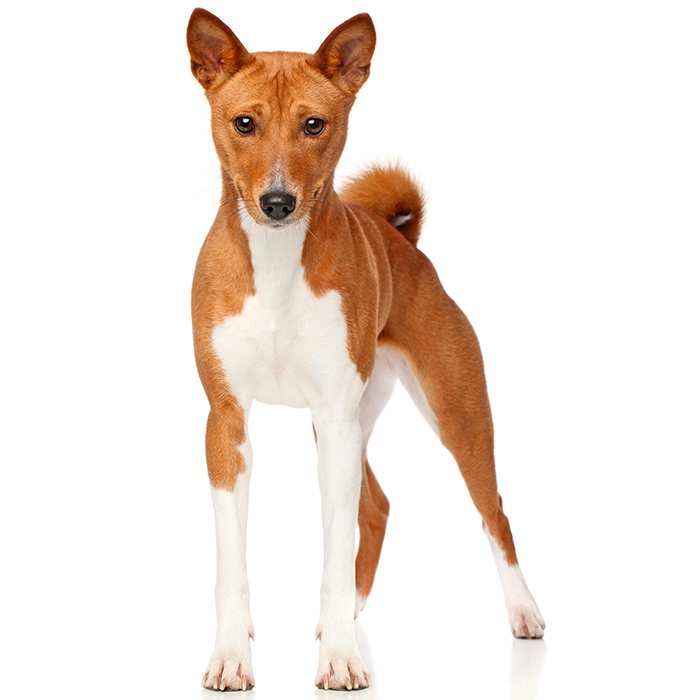 Is a Basenji the right breed of dog for you? Learn all about the Basenji dog breed, including photos and videos, as well as detailed info on the history, appearance, character, health, care, training and suitability of Basenjis.

Commonly known as the barkless dog, the Basenji is recognized by his sleek dingo-like appearance, catlike personality, and strangely shaped larynx which produces a sound more like a yodel than a dog’s typical bark.

The Basenji is a breed of hunting dog. It was bred from stock that originated in central Africa. Most of the major kennel clubs in the English-speaking world place the breed,  in the hound group, specifically in the sighthound type. Wikipedia 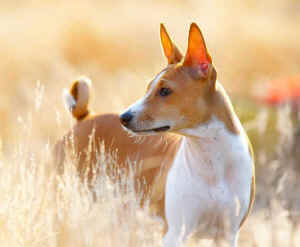 The Basenji is one of the world’s oldest known breeds of dog; first documented in ancient Egypt, the Basenji was used as a keen sighthound, capable of hunting down antelope and other game. Due to the Basenji’s catlike personality, lack of odor, and his tendency to clean himself like a cat, this unique African dog was commonly gifted to the Egyptian pharaohs.

As the ancient Egyptian civilization died out, however, the Basenji was at risk of disappearing as well. Fortunately however, some of the dogs were able to be saved and the breed was preserved in the heart of Africa. This is why the Basenji is commonly said to have developed in the Congo.

While the first Basenji dogs traveled to Europe as far back as 1895, these dogs did not survive and it wasn’t until 1937 that this unique breed was finally introduced to both the United States and Europe. In 1943, the Basenji was accepted by the American Kennel Club and entered into the Stud Book for registration. They have continued to grow in popularity ever since.

The Basenji is a primitive breed and has a more wild appearance than that of more commonly seen breeds of dog. In fact, his appearance is most often likened to breeds such as the Australian dingo, the Spitz dogs, or the Shiba Inu. His body is square and compact, lithely muscled and built for speed, as well as sheer power.

The Basenji dog’s coat is short and sleek, his legs long, and his tail is usually kept tightly curled up over his back. Basenji eyes have a distinctive almond shape and are keenly intelligent, slanted beneath a thoughtful wrinkled brow and large pricked ears. In fact, the Basenji’s profile is very similar to the ancient dogs paintings and statues found in the Tombs of Egypt. No wonder this magnificent breed holds themselves so proudly!

The Basenji temperament is said to be much like a cat; often aloof and standoffish, the African dingo is an independent dog who tends to prefer adult only homes or families with older children, where they can be the only pet. Additionally, the Basenji is an extremely clean dog who will tend to bathing his entire body much in the same way that a cat washes himself. Yes indeed, this beautiful African dog is a neat freak!

Basenji dogs may be a primitive breed, but the breed has been chosen for a specific purpose throughout the centuries. Originally bred for the purpose of running down game and helping to hunt, the Basenji is a high-energy dog that requires a great deal of exercise in order to stay healthy.

Insatiably curious, excellent climbers, amazing diggers and with a high level of intelligence, the Basenji may seem as if he was bred to be an escape artist and a mischief-maker rather than a hunter! If you have a notion to bring a Basenji into your home, be sure to take into consideration his athletic personality and his high desire to always have something to do. The Basenji is not a dog designed to be a couch potato. 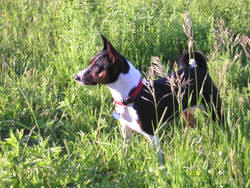 Fortunately, the Basenji does not require a high amount of grooming diligence. Brushing his coat once a week with a stiff bristle brush is usually enough to remove any dead hairs or dandruff, leaving him with a healthy, shiny coat.

While it may not always seem that the Basenji needs this weekly brushing, the hands-on time this provides is good for both you and your dog, as well as helping you notice any signs or symptoms, regarding illness or injury, that might have occurred with your dog.

Obedience training for your Basenji is essential! Notoriously aloof, intelligent and destructive, an untrained Basenji can wreck havoc in the home. Early socialization is important, both with children and other animals. For best results, it’s highly recommended that you start your Basenji puppy in puppy obedience courses.

This will help him to learn at an early age just what it is the you expect of him and, with positive reinforcement, will teach him to look forward to the classes and the benefits of working with his humans.

Like any breed of purebred dog, the Basenji’s subject to a variety of health concerns. When deciding to choose of Basenji puppy, be sure to check with several breeders and don’t be afraid to ask about the various health issues that can affect these beautiful dogs.

Any reputable dog breeder will be well versed in the health concerns that affect their particular breed and should be able to give you more details, as well as showing you the sire and dam of your potential puppy. Some of the health problems that commonly effect that Basenji include but are not limited to:

Is a Basenji Right For You?

While a fascinating breed of dog, the Basenji is not a dog for every household. Known to be very aloof and catlike, they may be ideal for the single person or childless couple. Dog lovers who prefer a quiet, odorless companion are great, but the Basenji may not be the ideal dog in a household with small children, other animals, or in a busy household.

Owning of Basenji requires a great deal of responsibility, dedication and patience, though fans of this breed believe the pros definitely outweigh the cons!

Share This
Categories
I am the footer call-to-action block, here you can add some relevant/important information about your company or product. I can be disabled in the theme options.
Get In Touch
Copyright 2020 - Dog Breeds A-Z. All Rights Reserved
Back To Top
×
Go to mobile version