Immortalized in many movies and television shows, such as “Shiloh”, “Cats and Dogs” and “Underdog,” the Beagle has always been an American favorite. Perhaps the best known Beagle of all time was “Snoopy” from the popular Peanuts cartoons.

Size: Standard size only, though there are also individuals out there, known as Pocket BeaglesColor: All the known hound colors and varietiesHeight: 15 inches or less at the shoulderWeight: 18-25 pounds on averageExercise Needs: DemandingGrooming Demands: MinimalLife Expectancy: 12-14 yearsGood With Kids: YesGood with Pets?: With caution – see below.
Ease of Training: Medium DifficultMisspelled Names: Beegle, Beagel, BeegelBreed Group USA: Hound

Like so many other dogs, the history of the Beagle has been obscured by the hands of time, leaving many to speculate and guess as to the origins of this magnificent canine. Records of keen sight and scent hounds have been found to predate even the Roman Empire and it is believed that the wonderful little Beagle may have dated as far back or, at the very least, is descended from these noble dogs. 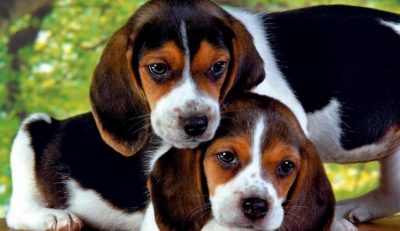 It is known that this breed was firmly established prior to the 18th century and, in fact, it was by cross-breeding the Beagle with a buck hound that they came by the popular Foxhounds, which were used for pack hunting.

From this cross, two separate varieties of dog were developed, one of which was known as the Southern Hound and the other which became the North Country Beagle.

Meanwhile, hunters in the United States were relying upon Dachshunds and Bassets for their canine needs. While quick and seemingly tireless, these dogs were not a suitable type for their job. In 1860, the European dogs would be introduced to the line and it would succeed in combining the tenacious qualities of the American Beagle with the beautiful type and correctness of the European strain. By 1888, the National Beagle Club was formed and the Beagles have been an American favorite ever since. 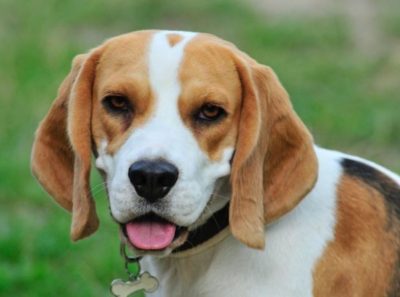 One of the most distinctive breeds of dog in the world, the Beagle appears to best resemble a miniature Foxhound, though he is a solid and sturdily built dog for his short height. Shown in two classes, 13-15 inches and the 13 inches and under divisions, he is still a very big and powerful dog for his little size.

Possessing an incredible amount of stamina and speed, he is more than capable of driving his quarry to the trees, the ground, or to the death if need be.

In addition to this diverse color variety, they can also be ticked, spotted, or can have black, brown, tan, or white markings. In a nutshell, the Beagle can come in just about any color and style you can imagine. 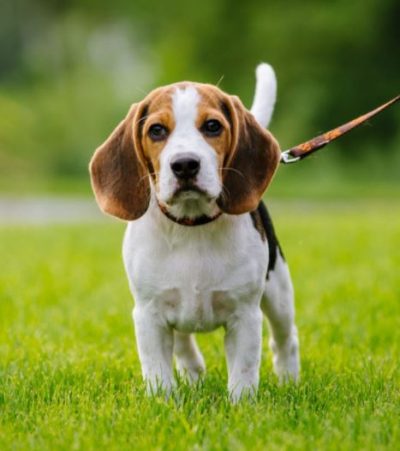 The Beagle dog is a popular dog breed with a tendency to be loving and good natured if given proper training and socialization. If you have kids, you may be considering adding a Beagle to your family. Is the Beagle a child friendly dog?

Although Beagles love interacting with children and are quite playful and tolerant of the antics of a child, caution may be in order if you have children younger than age six. In order for a Beagle dog to interact safely with a small child, he needs to understand that the child ranks above him in the pack hierarchy.

This is sometimes difficult to reinforce in the case of a young child since they are of such small stature, the Beagle may continually challenge them for pack position. The normally child friendly Beagle may exert signs of dominance and even aggression if left alone with a small child they consider small and non-threatening.

The normally gregarious, affectionate Beagle may become a less child friendly dog when it comes to the issue of food. Beagles love food and have a very advanced sense of smell due to their scent tracking skills. If a small child whom a Beagle considers to be non-threatening playfully reaches for his food, the dog may respond with aggressive action such as biting which could cause serious injury to a small child.

Once a child reaches the age of seven or eight, a Beagle can be an excellent pet. Energetic and curious, a Beagle is the ideal dog to form a strong bond with an active and inquisitive child. Once the pack hierarchy is established and the child is deemed to be a higher up pack member,

Beagles can be a remarkably child friendly dog who is both gentle and tolerant. It’s important that the child be taught how to respect the Beagle dog and not pull at his ears or aggravate him repeatedly as Beagles will sometimes snap as a protective mechanism if he feels threatened.

Many of the problems associated with the interaction between children and Beagles can be solved by early training and by exposing the dog to children at a young age. Children should also be taught to interact effectively with the Beagle. In addition to being taught not to taunt the Beagle with food, they should learn to keep doors and fence gates closed as Beagles are natural wanderers and can quickly escape if they detect a scent worth tracking.

By undertaking early training and adopting a Beagle only after the children reach a certain age, the happy-go-lucky, good natured Beagle can be a very child friendly dog and a real asset to the family.

While most tend to see the hound as a lazy dog, envisioning old-time Plantation movies with lazy loafers lounging on the porch, the Beagle is anything but lazy and inactive.

In fact, quite the opposite is true – a very active and enthusiastic individual, he will tirelessly play fetch, tug of war, and ‘hound’ the cat until there is no tomorrow. If not kept busy enough, he will even turn to your shoes or the furniture as a source of amusement – and that’s never a good thing.

It’s very important to remember that this particular breed has been bred, for centuries, to hunt down their quarry and chase after them as long as the prey will run. Even when not hunting, they are a very active, very high exercise individual.

At the very least, the Beagle needs several long brisk walks a day or a chance to run off steam within a fenced-in area. Never, however, let your Beagle off the leash unless he’s in an enclosure and supervised – Beagles are notorious for “catching a scent” and running off, often ignoring cars and other dangers.

Grooming the Beagle is relatively easy – a good brushing with a soft bristled brush will take care of any of those itchy spots, as well as loosening up any dander or loose fur, and a bath once or twice a month will keep your Beagle’s coat simply glowing.

Keeping the toenails trimmed short will help to prevent sore paws, as well as risking them catching them on the carpet, and the Beagle, like any floppy-eared dog, should have his ears checked regularly for any signs of dirt or infection. 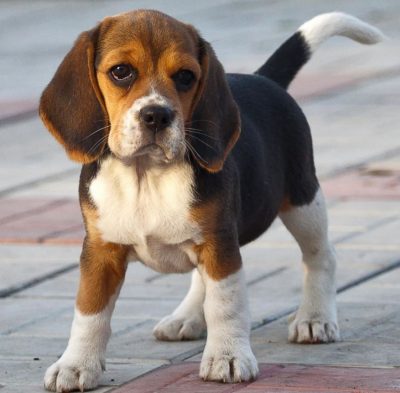 If you are challenged with the task of training a Beagle, be ready to put your patience to the test. Fun-loving and stubborn as a bull, most Beagles simply can’t be bothered with learning tricks and such mundane tasks as lay down and roll over.

Lay down? Shyeah-right – only after he’s finished making the cat run for cover and making sure there isn’t a bird traipsing about in his back yard. If you want to train a Beagle, chances are it will all come down to a battle of wits.

In order to train one of these rebels, you will want to use a technique known as “positive reinforcement.” This means that, rather than scolding your dog when he does something you don’t like, you simply ignore him and, when he does something that you want, you reward him with a treat and lots of excitement, happiness, and praise.

Making a big production of the desired behavior encourages your Beagle to continue doing this action in hopes of getting more goodies and attention. 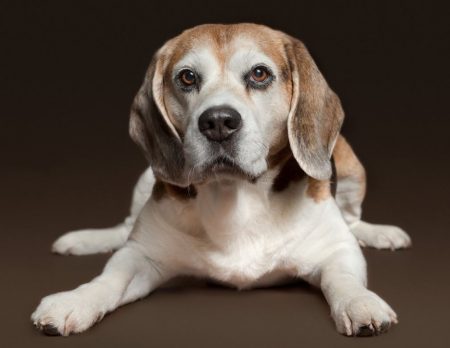 Beagle Dogs can be prone to certain hereditary health problems. That is why choosing a responsible breeder from which to purchase your Beagle puppy is very important. Responsible Beagle breeders will be well educated about the breed and carefully screen their breeding dogs for disorders that can affect these dogs.

Some health issues that may affect the Beagle include, but are not limited to:

Is the Beagle Dog Breed Right For You? 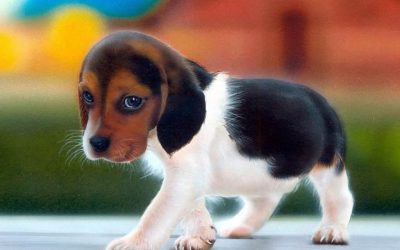 While films like “Shiloh” endear the Beagle to us, and he is known as a wonderful family dog, it doesn’t necessarily mean that the Beagle puppy that you’re so fixated on is the right dog for you. Before considering a pile of cute Beagle puppies, take a few moments to answer whether or not that the Beagle is the right breed for you – notoriously noisy, they can be extremely vocal and are not well-suited for apartment living.

There are bonuses to the Beagle, however. They are generally a very healthy and hearty breed, and have a great friendly love for children. The Beagle can make the perfect pet for the right family.

A word about “Pocket Beagles” and “Teacup Beagles” though!

Be very wary of what is known as the Pocket Beagle or Teacup Beagle, as these can prove to either be dwarf specimens, the results of heavy inbreeding (with lots of health problems) or can be the offspring of Beagles crossed with toy terriers. Always do your research and purchase a Beagle only from a responsible, knowledgeable breeder in whom you can place your trust. 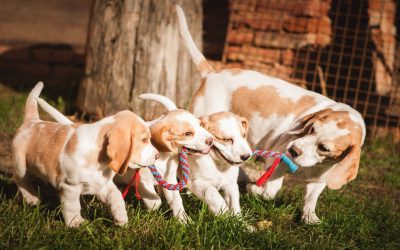