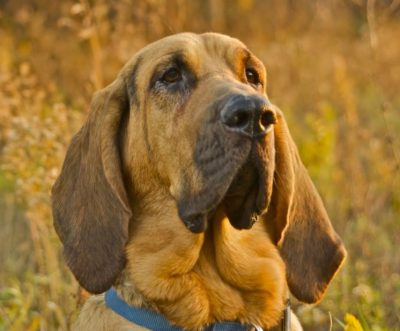 All About the Bloodhound Dog Breed

The Bloodhound is a grand, old breed. He is the quintessential tracking dog and has been used in this capacity by hunters and police for centuries. Through the years, the Bloodhound has had to overcome slanderous myths about his blood-thirsty tendencies and is today recognized for his docile and independent temperament.

The Bloodhound can be a handful and his care should not be taken lightly, but he does make an excellent second pet. The Bloodhound has a comically wrinkled face and a great propensity for drool. Self-important and stubborn, the Bloodhound doesn’t suffer fools lightly.

The Bloodhound is the granddaddy of all scent hounds. His roots can be traced back to France in the eighth century, but William the Conqueror has been credited with bringing Bloodhounds to England in 1066. Two hundred years later, clergy and other church officials were interested in using the Bloodhound for hunting.

As a result, many monasteries throughout England bred and kept packs of Bloodhounds. The breeding of the Bloodhound by the monks was a serious matter. In fact, it is from this pursuit that the Bloodhound gets his earliest name – the Blooded Hound, referring to their pure blood and nobility.

It came to be a common belief that the Bloodhound gleaned his name from his vampiric love of blood. This notion, which may have been cultivated by the police to keep criminals at bay, was wildly misguided. In fact, after locating his escapee, the Bloodhound felt his duty was over. The Bloodhound was never inclined to bite, maul or otherwise attack his quarry. Today, the Bloodhound is commonly used by police to search for that which is missing, illegal or otherwise unseen. 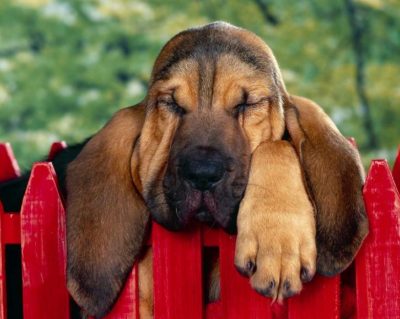 The Bloodhound has a noble and rather dignified appearance, aside form the drool. The Bloodhound is not swift of feet, but his endurance is supreme; slowly but surely the Bloodhound will prevail.

Although never scientifically proven, experts contend that the shape of the ears and the wrinkles on the face of the Bloodhound assist in his tracking. It is believed that the long, pendulous ears sweep the ground and stir up scents. Similarly, the wrinkles around the face trap minute scent particles and direct them towards the nose.

The Bloodhound’s loose skin extends over the neck and torso and falls in wrinkles. The Bloodhound’s coat is dense and sleek, allowing him protection from thickets and and the least resistance from dense brush. The gait of the Bloodhound is lively and surefooted, and his tail is tapered and carried high.

There is an uncommon stubbornness associated with the Bloodhound – an attribute that can likely be linked to his unwavering tracking instinct. For example, if the Bloodhound has decided on a suitable place to settle, there is no amount of pleading, tugging or pushing that will move him. In his own good time, the Bloodhound will move along, but there is little the owner can do to expedite this.

But it is when the Bloodhound is tracking a scent that he is at his most tenacious. Once the Bloodhound has found a scent, any scent, he is unwavering. The Bloodhound will ignore all commands while he is in pursuit, so never let a Bloodhound off a leash while walking him.

While at home, the Bloodhound is extremely trustworthy around children, although he may carelessly knock them over with his sizable girth. His is so gentle and patient in fact, that some children may be bored by the Bloodhound’s unwillingness to play. But, don’t let the folkloric image of the lazy ol’ hound-dawg characterize this breed. The Bloodhound is more active and fun-loving than he has been portrayed, but this is on the Bloodhound’s own schedule.

The Bloodhound is a hunting dog and will need long daily walks, but above all else, have a strong grip on your Bloodhound’s leash. While he may not be fast, he won’t heed you command if he is tracking a scent. The Bloodhound has been bred to track in all weather and through field and stream, so he will love a country romp. City dwellers can walk their Bloodhounds on sidewalks and in parks, but beware of the plethora of tempting scents that will mesmerize your dog, and may drag the owner far and wide.

The Bloodhound has some unique grooming requirements. The coat itself is the least demanding of his needs – a daily brush will help the natural oils keep the Bloodhound’s coat gleaming. On the other hand, the Bloodhound’s head needs greater consideration. The tips of the Bloodhound’s ears tend to dip impolitely into his food leaving a crusty, unpleasant reminder of his meal.

This, compounded with swinging drool, can lead to an rather disturbing display. Regular cleaning of the Bloodhound’s ears, both inside and out is essential. The Bloodhound’s facial wrinkles will also trap food and drool. So to keep doggie odour to a minimum, clean this area daily. The Bloodhound can sometimes have weepy eyes which will also garner some of your time.

As a breed, the Bloodhound is more inclined to follow his instinct than a command. Pairing this with the Bloodhound’s stubborn nature and his odd, but distinct sense of self importance, can make training your Bloodhound tricky at best and maddeningly impossible at worst. The owner is well advised to accept this independent attitude from his Bloodhound and to view the hound’s baby steps at obedience as victories. Many Bloodhound owners resort to seeking professional training. Either way, steel yourself with zen-like patience and a stiff drink before attempting to train your Bloodhound.

Is a Bloodhound Right For You 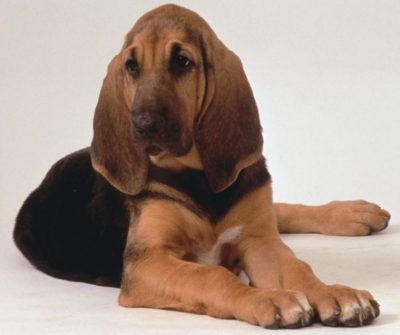 The Bloodhound is an affectionate breed with a distinctly stubborn character. His needs are significant, and many hands may be needed to lighten this load. Grooming is a daily (and at times unpleasant) requirement, and there is no guarantee that your Bloodhound will welcome or allow this regime.

The Bloodhound will need daily walks accompanied by you and your firm grip on his leash. Rural families are better suited for the Bloodhound but be certain that your yard has Alcatraz-like fencing to contain his tracking instinct. Seniors may find the Bloodhound’s size and stubbornness too unyielding for their liking and city dwellers may lack suitable space. But, if you fancy a sweet but quirky hound, and you are domestically prepared, the Bloodhound makes an excellent pet.

Sadly, many owners become overwhelmed with the responsibility of a Bloodhound. Consequently, many Bloodhounds are given up for adoption when they reach adulthood. There are several responsible adoption agencies and rescues that may have your perfect Bloodhound ready and waiting. So, before you purchase a puppy, please consider this option.