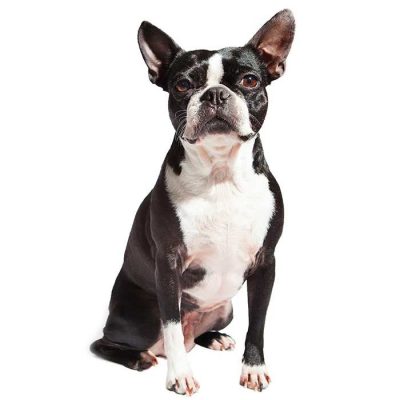 The Boston Terrier is a stylishly handsome, robust dog. He is lively and alert yet has an undemanding disposition. The Boston, a truly American breed, is instantly recognizable for its formal appearance and its distinctive coat. Historically, the Boston Terrier has a well documented lineage with its heels firmly entrenched in early American aristocracy. It has seen a meteoric rise in popularity since its induction into the American Kennel Club.

Truly, this dog needs no introduction. Dog lovers the world around recognize this breed as an even tempered, fun loving family pet and consummate show dog. And, if ever there was a dog whose cheeks are ripe for the squishing, the Boston Terrier is it. 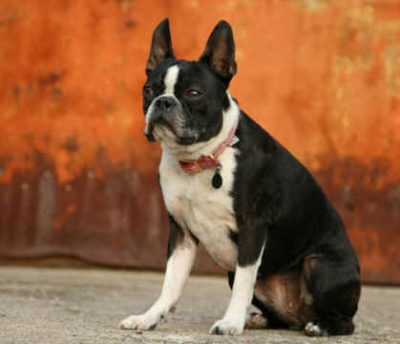 The history of the Boston Terrier is well documented. Sometime around 1865, coachmen who were employed by wealthy Bostonians, decided to crossbreed some of their employer’s purebred dogs.

Soon, the Boston Terrier was a popular breed throughout the city and legitimizing and naming this terrier was well underway. Originally, breeders chose American Roundhead Bull Terrier as the proposed name for the Boston Terrier, but that name was rejected.

The shortened version Roundhead Terrier was also dismissed. In 1893 the breed was admitted into the American Kennel Club and its name changed to Boston Terrier to honor its ancestral home. Notably, the Boston Terrier was the first US breed to be recognized by the AKC.

The Boston Terrier is a handsome, muscular breed. He is compact and well proportioned with a thick, powerful neck. The Boston Terrier’s head is square in shape and his muzzle is about 1/3 its length. His ears, when cropped will stand erect and his tail is short and tapered.

The Boston Terrier has a dapper and dignified appearance. The Boston Terrier sports a striking short coat with a distinguishing white stripe that sweeps up and over his head. Accepted colors are bindle, seal or black; all with white markings between the eyes and around the neck. His tuxedo-like coat and square, slightly drooping jaw make the Boston Terrier an elegant and immediately recognizable dog

The Boston Terrier has naturally friendly disposition and seldom takes an unprovoked dislike to people. He is equally pleasant with children and other dogs. Some household pets should tread with caution around the Boston Terrier, especially if they are of the feline persuasion. But, if your Boston Terrier has been brought up with kitty, he will see her as a companion rather than a foe.

The Boston Terrier has moderate exercise needs. He will relish a daily walk but you needn’t worry that your Boston Terrier will run you ragged. A 2 mile walk or a vigorous game of fetch will suffice. Inside, the Boston Terrier is more docile than rambunctious, and as he matures, so will his love of relaxation.

The Boston Terrier is a ball of muscle so he is faster on his feet than his refined stance might suggest. Be certain to keep you Boston Terrier on leash, even on short walks. He will enjoy leash-free dog parks as his temperament makes him an agreeable companion for man and beast alike.

Typically, grooming your Boston Terrier is an undemanding task. You will need to brush your terrier’s coat with a firm, non-wire brush. Wire brushes can scratch your Boston Terrier’s skin, so a natural brush is best. Baths should be taken when necessary and you should use a low fragrance shampoo.

Be sure to rinse all shampoo residue from your pet to avoid skin irritation. Nails will need clipping and a professional groomer may make a prudent choice as their specialized equipment makes for a comfortable trim.

The key to keeping your Boston Terrier relaxed enough to allow the grooming is your tone and actions. You should reassure your terrier in a calm, low tone, and establish it as a relaxed and luxurious event. Your Boston Terrier may begin to enjoy and welcome these procedures.

House training your Boston Terrier works best when you commit to using the Bridge Word method and start the training when your puppy is about 6 weeks old. To use this method, select a simple world like ‘yes’ or ‘good’ and instruct all family members that this word, and this alone, indicates correct response.

Reserve an especially delicious treat, like liver bits, to reward proper behaviour. Don’t let your Boston’s cute antics swindle you out of a liver snack, this is to be awarded only if your Boston Terrier uses appropriate bathroom facilities.

Next, take your Boston Terrier outside immediately following a nap or meal. As soon as he goes, say your bridge word and reward with the liver treat. Soon, this will establish a regular routine and you can begin to expand the training. Still, use your special treat only when a command is obeyed.

Is a Boston Terrier Right For You? 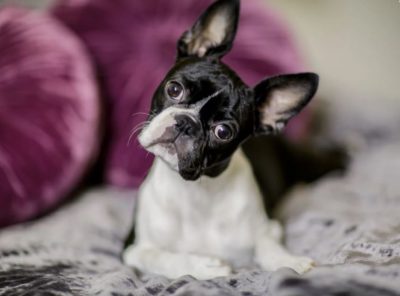 The Boston Terrier is the perfect first dog. He is gentle and agreeable and will happily complete any family. Because the Boston’s needs are few, busy families will be delighted by this terrier’s reasonable exercise requirements and simple grooming.

When purchasing your Boston Terrier, resist the urge to purchase a dog inexpensively from a pet store or from an advertisement in a newspaper. You may unwittingly buy a mal-adjusted, sick, puppy mill dog. This is to be avoided at all costs.