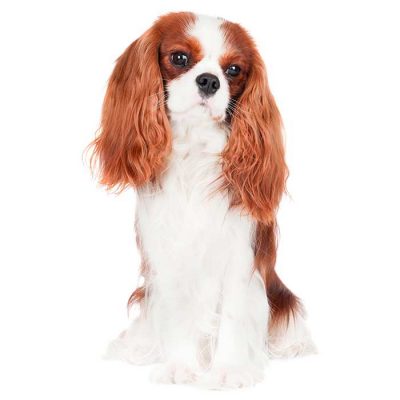 Whether you live in an apartment, or a castle, this regal little dog makes an excellent companion!

The Spaniel has been a popular European dog for centuries; originally bred for the purpose of hunting game, his quiet nature and sweet disposition endeared him to most who encountered the soft-coated sweetheart. As time progressed, different Spaniels emerged for different purposes – the larger Spaniel dogs were adept at hunting fowl whereas smaller Spaniels were ideal for smaller game like rabbits. Eventually, the smallest Spaniels were taken in and became a favored pet with the royalty. Early relatives of the King Charles Spaniel can be found in paintings dating clear back into the 16th century.

The small Spaniels so favored by Charles I and his family were somewhat different from today’s King Charles Spaniel – lighter in body and possessing more pointed features, like the other varieties of Spaniel, it wasn’t until the Asian breeds became popular that the King Charles Spaniel began to make some changes.

While it’s unknown if the first matings were simply accidents or planned breedings, crossing the King Charles Spaniel with other Asian breeds such as the Japanese Chin or Pug soon became the latest fad. The resulting puppies carried much of their Spaniel appearance, though they developed the round or domed head that was so prized amongst the Asian breeds. Needless to say, they were an instant hit.

Nevertheless, the King Charles Spaniel was still considered a dog of mixed origins. It wasn’t until an American, by the name of Roswell Eldrige, decided to offer forth a sizeable prize of twenty-five pounds that the breed became a reality. Admiring the dogs from the old paintings, Eldrige issued forth a challenge for any to create a Spaniel that possessed this old-fashioned type and coloration. The result would be a pup that bore likeness to the childhood pet of Charles II of England and, because of this, he would come to be known as the Cavalier King Charles Spaniel.

One of the largest recognized members of the toy breeds, the Cavalier King Charles Spaniel was bred for the specific task which he performs so well – that of a dignified and regal lap dog. With his soft coat and woebegone expression, he endears himself to people with ease. Few cannot look at a Cavie and not fall in love.

The Cavalier King Charles Spaniel comes in 4 different colors – A beautiful rich ruby shade, an elegant black-and-tan, the snappy looking tri-color and the popular Blenheim, consisting of beautiful russet spots on a pearly white background. Blenheim puppies usually have a spot atop their head – this spot is often called a lozenge or kissing spot, but can also be called the Blenheim spot, kiss of Buddha or kissy spot.

These small, loveable dogs are fairly low-maintenance. Cavalier King Charles Spaniels are very intelligent little dogs, and love children. They fit in well into most living situations, and thrive on human attention and companionship. They also get along very well with other dogs, cats and family pets.

Known as the ultimate lapdog, this sweet-tempered canine makes a wonderful companion dog for the single person or elderly, and also manages to make an ideal family pet. Possessing a great deal of patience and a very sweet attitude, he is usually very tolerant of children and other small animals – moreso than his more popular cousin, the Cocker Spaniel.

Unlike many of the Spaniel dogs, the Cavalier requires little physical exercise. Happy with the occasional walk and opportunity to do his business outside, he is the perfect lapdog and, accordingly, tends to be better suited for loafing around.

It’s important to get your Cavalier King Charles Spaniel puppy used to regular grooming at a young age – it’s also a good habit for you. While the Cavie does not require the time consuming and costly primp of many other breeds, it is important to comb out his hair on a daily basis (particularly his ears), thereby avoiding snarls which can lead to painful mats. Additionally, this hands-on attention is good for your dog’s physical and psychological health and it’s a known fact that it’s good for the human’s health as well!

Training Cavalier King Charles Spaniel puppies requires that you maintain a degree of patience and understanding. While eager to please and very loving, they are more content with lazing about on your lap all day, rather than doing tricks for attention. The Cavalier can also be rather difficult to housebreak.

Like any breed of dog, the Cavalier King Charles Spaniel is subject to a variety of health concerns. Your best bet is, when deciding to choose a new Cav puppy, check around with several breeders and ask about the various health issues that can affect these beautiful dogs. A reputable breeder should be well-versed in the health concerns and should be able to give you more details, as well as showing you the sire and dam of your potential puppy. Some of the health problems that can affect Cavalier King Charles Spaniels include:

Generally a very friendly and tolerant dog, the Cavalier King Charles Spaniel makes a wonderful family pet as well as an excellent and popular companion for the elderly.

The Cav can be notoriously hard to housebreak and prefers to be a bit of a laze-about, humans permitting. If you don’t mind these little character flaws and have your heart set on a beautiful and loving Spaniel, the Cavalier King Charles Spaniel may be just the right dog for you!