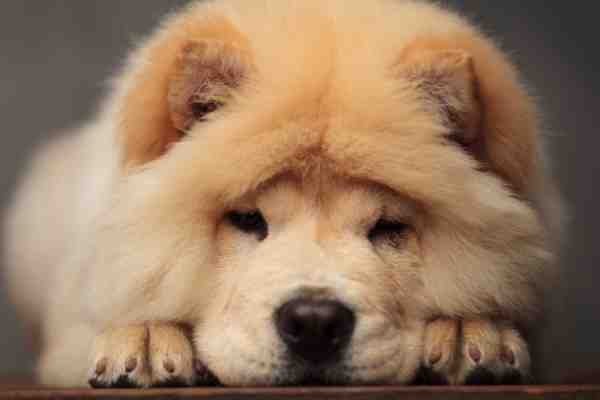 Members of the Chow Chow dog breed is noble and dignified, dogs who conduct themselves with a stately reserve. Cuddly the Chow Chow is not, but his reliability as a protector and watchdog makes him a valuable family pet.

Through the centuries, the Chow endured many roles, some lofty and others were downright cruel. He has survived near extinction, servitude and most disturbingly, the stewing pot. Today, this Chinese breed of dog is well known for his lion-like mane, glorious coat and unusual blue tongue.

The Chow Chow is one of the oldest breeds in the world. A descendant of the wolf, the Chow Chow is believed to have originated in the regions of northern China and throughout Mongolia. Unusually, the Chow Chow was bred for many tasks; hunting, sniffing, pulling, herding and protecting. Bas-relief images of Chows performing these duties have been discovered in China, dating back as far as 150 BCE.

Later, Chinese nobility fancied Chow Chows as sniffer dogs for the Imperial hunts, until the hunts fell out of fashion. Soon other, more gruesome uses for the Chow Chow were found. The Chow’s thick fur was harvested for the backs of the wealthy and fashionable, and the meat was consumed by them.

In fact, for about 200 years, the Chow Chow was bred to be eaten and many Cantonese restaurants offered it on their menus. In 1915 a law was passed prohibiting the sale and consumption of Chow Chows, but their numbers had been decimated and unlikely to recover without intervention. Luckily, a few pure Chows were kept as companion dogs in wealthy Chinese households and in some monasteries.

By the 1700’s the Chow’s numbers had stabilized and some specimens had been exported to England. It is likely from this voyage that the name Chow Chow was established. It seems, when the Chow was logged as cargo aboard these trading ships, it was listed simply as an Oriental knick knack, which translates roughly to Chow Chow. These early exports were looked upon as curio and the word chow was adopted by the English as a vaguely derogatory term for food.

By the mid-1800’s the Chow Chow was well established on both sides of the Atlantic and in 1903, the American Kennel Club recognized the Chow. Since that time the Chow Chow has seen a steady climb in popularity, peaking in the 1980’s when the Chow was the sixth most popular breed in America.

The Chow Chow is certainly one of the world’s most distinctive breeds. He is squarely built and muscular with sturdy, heavy bones. His eyes are almond shaped and his muzzle is relatively short. The Chow’s expression ranges from scowling to friendly.

There are two, rather unusual features of the Chow Chow. The first is his blue-black or purplish tongue which extends to the Chow’s lips and oral cavity. And, while other breeds may show purple spots on their tongues, the Chow is the only breed to have this colouration throughout his entire mouth. The second unusual characteristic is the Chow’s stilted gait. The Chow Chow’s rear legs are almost straight and his feet have a bulbous quality that together results in a stride that is unique to the Chow.

The Chow Chow’s scowling expression hints at his reserve. The Chow is not an affectionate breed, although he is devoted to your family’s protection. The Chow Chow can be quite intolerant of strangers, and their bark coupled with their girth can be off-putting to those unfamiliar with the breed.

The Chow will allow his family to pet him, but newcomers will not be extended this liberty. The Chow’s penchant for territorialism certainly extends to other family pets, so your hamster is a goner if the Chow sees him. But, if you are determined to populate your home with more than one pet, another opposite sex Chow Chow is suggested. Two male Chows cannot peacefully cohabitate. Cats stand no chance.

In recent years, the Chow Chow’s reputation for aggression has been at issue. Numerous claims to some homeowner insurance companies have necessitated that homes with Chows are uninsurable. So, before purchasing a Chow Chow, investigate whether your policy will allow Chow Chow ownership.

It would be wrong to suggest that the Chow Chow is lazy. Rather, the Chow is a breed of regal leisure, leaving the drudgery of exercise to the Bourgeois. The Chow expects casual, non-strenuous strolls in cool temperatures or short periods of independent yard play throughout the day. But, do not expect your Chow Chow to gaily prance after thrown sticks. He will ignore the request with rolled-eye repugnance.

The Chow Chow is nothing of not hairy. No matter which coat variety one chooses, grooming your Chow Chow will take some effort.

The smooth coat Chow Chow will need daily brushing, paying special attention to the chest and mane. During the spring, the smooth Chow will blow his coat and vast clumps of hair will find their way into every imaginable (and some surprising) spaces.

The only consolation to this is that you have purchased the smooth hair Chow. If you purchased the rough coat Chow Chow, you are probably not even reading this. You are likely sweeping the shed into mountainous heaps of fur, all while pondering the physics of three feet of fur shed from a two foot dog. Curious.

Before attempting to train your Chow Chow, bear in mind that he will be totally disinterested in obedience, but he may respond well to your positive reinforcement. The Chow is a natural problem solver, so providing him with hunting challenges or an obstacle coarse will go a long way in keeping your Chow mentally challenged.

Experts contend that clicker training is the most effective tool to use when training Chow Chows. Whenever appropriate behaviour is demonstrated, the trainer uses a clicker device which delivers a distinct, metallic sound. Immediately following the click is a treat.

Soon, the Chow recognizes that if the click is heard, a treat is soon to follow. The advantage of this method, is the immediacy of the trainer’s assurance of acceptable behaviour. Using this method, the Chow Chow quickly establishes an association between proper behaviour and a treat. Without the clicker, the lag time between proper behaviour and the reward can to too long for the Chow and the association between the two is not made.

Failing this, the responsible Chow Chow owner will seek professional obedience training. The Chow’s suspicious temperament makes his training essential to the health and well being of your Chow and of your family.

Also of note: Your Chow Chow is highly intolerant of heat. Heat stroke and exhaustion are dangerous, life-threatening conditions, so be vigilant in keeping your Chow cool.

Is a Chow Chow Right For You?

There are two considerations for choosing a Chow Chow. First, potential Chow owners who regularly welcome drop-in visitors may find Chows too impolite. And, if your vision of a family pet involves children cuddling your grateful dog while the cat calmly purrs nearby, do look elsewhere.

However, if you are a mature family with a fenced yard then Chow Chow may be for you. Urban folks with an unwavering commitment to grooming may be charmed by the Chow Chow’s aloof and dignified manner. Rural families may also enjoy the Chow Chow especially if the Chow is the only pet and if the children are older.

When purchasing your Chow Chow, resist the urge to purchase a dog inexpensively from a pet store or from an advertisement in a newspaper. You may unwittingly buy a mal-adjusted, sick, puppy mill dog. This is to be avoided at all costs.