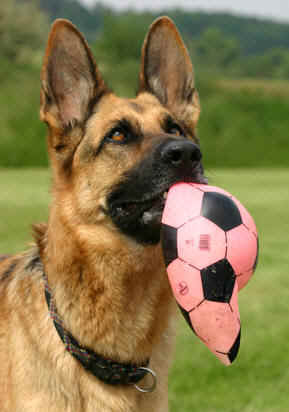 All About German Shepherd Dogs and Puppies

One of the most beautiful and easily-recognizable breeds in the AKC, the German Shepherd has long captivated us with his noble and wolfish appearance, his loyalty, and his versatility. Able to learn and adapt to almost any new task set before him, he is a master of many trades, some of which include herding, assisting those who are blind or disabled, protection and guard duty, acting in television and movies, and assisting the police force. Whether you meet one in person or see him on the silver screen, the German Shepherd is a noble breed and one that is sure to capture your heart.

The History of the German Shepherd

The German Shepherd is a descendant of a variety of different German herding and farm dogs. In 1891, a group of dog fanciers joined together with the hopes of fostering and promoting some of the various dog breeds of Germany. Called the Phylax Society, and lasting a mere 4 years, they are often credited for having helped to develop the German Shepherd dog that we know today.

Capt. Max von Stephanitz also plays a major role in the development and preservation of the German Shepherd dog. Long an admirer of the German sheepdog breeds, von Stephanitz was attending a dog show with his friend, when he came upon a dog that possessed all of the traits that he desired in a dog – strength, intelligence, and incredible versatility.

So impressed with this animal (originally named Hektor Linksrhein, though his name would later be changed to Horand v Grafeth), that he promptly purchased the dog and quickly formed the Verein fur deutsche Schaferhunde (SV), a society for the German Shepherd dog. By the turn of the twentieth century, the SV had become the largest dog breed club in the world.

Von Stephanitz was very dedicated to the German Shepherd breed and, noting that with the turn of the century came changing times, he began to look to the future. Knowing that there would not always be a place for this magnificent dog in the countryside, he focused on placing his sheepdog to work in various government jobs. During the first World War, the German Shepherd would be employed as a sentry dog, guard animal, rescue dog, and as a deliverer of messages.

When the United States servicemen saw this noble dog in action, many were impressed and the German Shepherd dog would soon make his way to US soil. By 1919, the American Kennel Club would recognize and register this unique breed of German sheepdog and von Stephanitz’s dream would be fulfilled.

A very proud and noble breed, both in attitude and appearance, the German Shepherd form boasts strength, speed and agility. They are best described as being “10-to-8 1/2” in length-to-height, meaning that they are slightly longer than they are tall. This adds to their sleek and streamlined look, coupled with the dog’s uniquely tapered topline and sloping hips. Designed to cover a great deal of ground, this different build allows the dog to maintain his smooth flowing gait for long periods of time, as well as giving him powerful forward thrust, thereby granting him great sprinting and jumping ability.

A very dedicated and determined worker, the German Shepherd dog possesses a get-up-and-go attitude towards most everything that he does. Very athletic, he loves to be on the move and active. In addition to his athletic side, the German Shepherd can also be very devoted, particularly to his main care-taker. Quite often, they can show favoritism and will become one-person dogs, turning a cold shoulder to anyone else who tries to befriend them. Nevertheless, most German Shepherds do very well in a family environment and, while they may favor one particular person, they are generally protective of their entire “pack” of humans. Towards others, one can often expect an aloof mannerism – the German Shepherd does not give his friendship to just anyone – his respect is earned.

The German Shepherd is a natural athlete and, for this reason, they need room to move. While they can adapt to living in an apartment, anyone who considers getting one had best realize that they will have to be going out for frequent walks, as well as regular trips to the local dog parks. Ideally, this is a dog that needs a fenced-in yard and a lot of room to run.

While not as bothersome as some of the longer-coated dogs, the German Shepherd is still prone to heavy shedding, particularly during warm weather. Ideally, you will want to brush him a couple times per week, more if he is shedding profusely. Bathing should be done once a month or as needed, dependant upon your dog. Aside from this, keeping his nails trimmed and teeth cleaned should be all you need to maintain a happy (and gorgeous) German Shepherd dog.

This is a surprisingly keen breed of dog and one that can adapt to nearly any task set before him. Trained for detection, assistance, guard duty, and a host of other jobs, he is an extremely quick and willing learner. However, with this quick wit can also come a game of “who’s smarter” and it’s important not to let your German Shepherd get the upper hand. For best results, start him in obedience as early as possible, be consistent, and be sure to reward your dog for positive behavior.

As with many pedigreed breeds of dogs, there are a variety of hereditary conditions that may affect your pet, as well as other various health issues that are more common amongst the German Shepherd dogs. These are not limited to, but may include the following:

Is the German Shepherd the Right Breed For You?

With a beauty and nobility unmatched, many are captivated by the beauty and strength of the German Shepherd breed. Others are moved by his wolfish appearance and seek him out as a domestic alternative to his wild cousins, and some choose German Shepherd puppies for their versatility and loyalty. Whatever the reason for considering getting a German Shepherd puppy, it’s important to realize that this breed can be a lot of work. Requiring a great deal of exercise and brushing, they are not the ideal dog for someone with a very busy lifestyle, and it’s important to note their tendency to bond with a single person.

A German Shepherd can make a wonderful family pet, however. The key to this is to always supervise your German Shepherd when small children are about, and be sure to introduce him to other pets and family members gradually. Taking the extra time and effort with this breed will ensure that you have a lasting friend for many years to come.