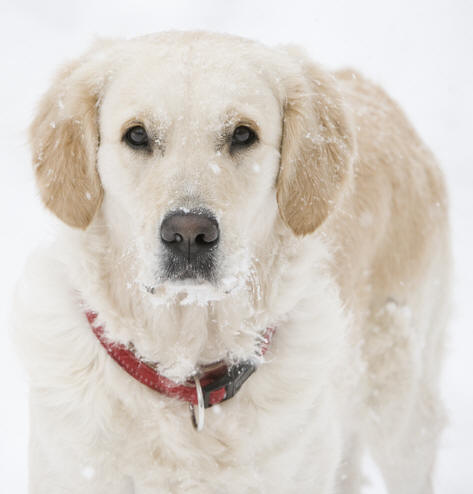 One of the most widely recognized and loved dogs in the world, the Golden Retriever is a wonderful canine that astounds, both in the field and in the home. Possessing both superior hunting skills as well as the ability to take on the role of favorite family pet, he is as adaptable as he is beautiful and intelligent to boot. Few who have had the luck of knowing a Golden Retriever, can walk away without singing the praises of this wonderful canine companion.

Unlike many breeds of dog, the origins of the Golden Retriever can accurately be traced back, not only to the dogs responsible for first imprinting their type upon their offspring, but also to the very first person to ever own a Golden Retriever.

This person would be Sir Dudley Majoribanks of Scotland, who would later go on to be known as Lord Tweedmouth. In 1865, Majoribanks would purchase a young dog from local cobbler; supposedly the only yellow pup out of a litter containing wavy-haired black retriever pups, the young dog would be named “Nous,” and was taken with Majoribanks to join his kennel of sporting dogs in Guisachan, Scotland.

Seeking to breed and develop a dog that was better-suited to the Scottish climate and terrain, Majoribanks finally crossed Nous with another dog on his property, a Tweed Water Spaniel by the name of Belle.

While the Tweed Water Spaniel eventually became extinct, the breeding of Nous and Belle would produce several yellow puppies in 1868 and 1871, that would become the foundation stock to create this distinctive breed of yellow-coated retrievers.

The Golden Retriever is a beautiful member of the dog world. Well-balanced and symmetrical, he is a dog that is built for endurance, power, and strength. Eager to work and possessing a high amount of energy, the Golden Retriever carries a look of ready alertness and curiosity at all times. Just from a glance, one should know that this dog is no couch potato, but a hard-working get-up-and-go type of dog.

With males standing 23-24 inches tall at the top of the shoulder, and the females 21.5-22.5 inches in height, they are not the tallest breed of hunting dog, but perfect for moving through the tall grass virtually undetected. The Golden Retriever is not the heaviest of hunting dogs, either, though his frame is stout and compact.

A full-grown Golden Retriever can weigh anywhere from 55-75 pounds, though they rarely seem to weigh that much when one gazes upon a Golden.

And then there is the Golden Retriever’s crowning glory – his luxurious coat. Repellent of water, the Golden’s coat may be either straight or wavy, and is well-recognized for its various rich golden hues. These can range from a white gold to red-gold in color, though he is faulted for possessing any white markings or being too pale a shade.

Prospective buyers should especially be wary of scam artists, trying to sell “rare white golden retriever puppies.” White Goldens are, in fact, merely Golden Retrievers of poor color, and should be avoided. While one may make an excellent pet, prospective buyers should veer away from anyone not practicing ethical breeding practices and misleading people with false claims.

The Golden Retriever is of a very kind and gentle nature. Keenly intelligent and eager to please, they make excellent companions, as well as the superb hunting dogs that they were designed to be.

The Golden Retriever is a sweet dog and generally very good, both with children and with other animals alike, though he is definitely not cut out to be a guard dog. Quite often, Golden owners will joke that their beloved pet would greet a burglar at the door with wagging tail and a happy bark, begging for attention.

The Golden is an active dog, bred for hunting and working out in the field. Because of this, heï¿½s very much a get-up-and-go dog that loves his exercise and time to run. While they can live in apartments, time must certainly be made down at the local dog park, just to give him time to run and work the kinks out.

Golden Retrievers tend to love to play fetch or Frisbee, both of which are high energy and can help him burn off some steam. Just be careful – once your Golden Retriever gets started, he may not want to quit chasing that ball and go home.

Important to note, however, is that a Golden should never be force-exercised before 2 years of age. Slow-growing, a regimental exercise program can injure young dogs, so it is best to stick to more relaxed sports. Some good examples of light exercise for a Golden Retriever include taking walks on soft surfaces or swimming. Build up to the big stuff, both for you and for your dog’s health.

In fact, Golden Retrievers shed a lot, all year round. If youï¿½re interested in one of these wonderful dogs, itï¿½s best to keep in mind that you will spend a lot of time vacuuming the floor and the furniture with this hairy bundle of joy.

The Golden Retriever is a very intelligent dog that is eager to please. Very open-minded, they love to learn and approach each new opportunity with a quick and willing desire. Obedience classes are an excellent choice, not only for your young dog to learn, but also for you to learn to get along with your dog and how to properly handle him. Golden Retrievers are very smart and so care should be taken to curb any bad habits in a gentle but firm tone – chances are, he will be happy to stop, just as soon as he sees this displeases you.

The Golden Retriever is a fairly robust and healthy breed though, like many other purebred dogs, can often fall victim to a variety of genetic health issues. Fortunately, with Goldens, the number of defects is much less than in other breeds. Some examples of problems to look out for include:

Is a Golden Retriever Right For You?

The Golden Retriever is a wonderful dog for the right family. Careful consideration must be made, however, prior to buying. While most Goldens are excellent with small children, parents should know that a small child should constantly be supervised with any animal, not only for the safety of the child, but also for that of the pet.

Additionally, one should keep in mind that the Golden Retriever can sometimes be a high maintenance pet, between the brushing and exercise. If these things are not a problem for you, then perhaps you may be the right family for a bundle of Golden Retriever joy.