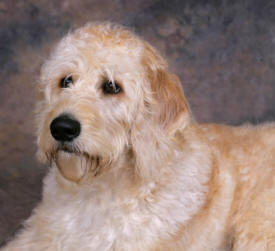 The Labradoodle, a crossbreed from a Labrador Retriever and a Poodle, is a handsome, playful dog. For the most part, he has inherited the best qualities from his poodle parent -low shedding and low dander, and from his Labrador parent – gentle temperament and trainability.

Since 1989 when this breed was first introduced, the Labradoodle is somewhat varied in appearance. The spectrum of colours ranges from nearly white to black with many winsome mixes in between. The coat’s texture ranges from a subtle wave to a curly cotton ball quality.

Perhaps the best known feature of the Labradoodle is its extraordinarily cute appearance and mild disposition. Frankly, they’re just the nicest dog one can image.

The Labradoodle with its strikingly cute face was first bred in Australia in 1989. The goal of the breeder was to create a dog with a low-shedding coat along with a gentle nature and high trainability. The breeder, Wally Conron, was keen to breed a dog that would make a good guide dog for allergy sufferers. He selected, as you may have guessed, a Labrador Retriever and a Poodle. The offspring, now a well loved and popular pet, was a smashing success and families the world over welcomed the Labradoodle into their homes. 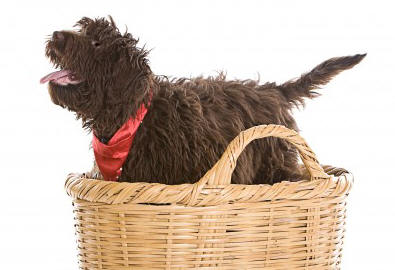 The Labradoodle is a relatively new breed and therefore its genetics are not yet fully stabilized. This means that puppies may not have consistently predictable characteristics, but they sure are cute! Typically, most Labradoodles inherit the wavy or curly coat of the poodle parent. The coat can range from very soft and fluffy to a more wiry, unruly texture. They do shed, as do all dogs to some degree, but the Labradoodle’s shedding is minimal and they seem to have less doggie odour than their Labrador cousin. From the Labrador parent, Labradoodles usually inherit a gentle, patient nature.

Labradoodles have a keen, friendly and somewhat doe-eyed expression. They seldom appear threatening even in the larger variety. Labradoodles seem to always look like they are just waiting for the fun to start; ready to fetch, jump and play.

Most Labradoodles are friendly and energetic. They love attention but will not aggressively seek it. Families with children can welcome a Labradoodle into their home as this breed tends to be gentle and agreeable with children; even when dressed as a princess! (Do be vigilant in teaching your children how to play safely with a Labradoodle. Any dog can bite or nip if he feels pain or is threatened) The precise temperament of your Labradoodle is mostly contingent on the temperaments of his parents. So, choose a breeder who screens for good temperament. This will help assure a happy, well bred dog.

Labradoodles need regular, moderate exercise. Puppies, especially between 14 and 26 weeks, need controlled exercise as this is the period of time when they have an accelerated growth spurt. For Labradoodle puppies, a 20 or 30 minute walk will suffice. Avoid jogging or cycling with your Labradoodle puppy because their puppy-legs and joints can easily become damaged. Be especially vigilant with allowing young puppies to run up long hills This joint damage can carry into adulthood.

The amount of grooming your Labradoodle requires depends on the nature of his coat. Some first generation Labradoodles have a wavy, slightly wiry coat that needs very little attention. Brushing a few times per week to prevent matting and a bath a few time per year should suffice.

Other Labradoodles, have a woolly, curly coat that does require more work. Daily brushing is essential to avoid or minimize matting. Some Labradoodle owners prefer to clip the coats rather than deal with the brushing and matting. This shorter coat when brushed looks embarrassingly frizzy. Try a simple water spritz and the curls will return (along with your Labradoodles self esteem).

Labradoodles are highly trainable. In fact, many have been trained to obey sign language, traffic signals and pedestrian rules. This feature makes them an outstanding guide dog.

For domestic harmony, it is essential to train your Labradoodle puppy early. The goal is to establish the owner as the “leader of the pack”, with other family members also ranking above the dog. This is accomplished in an interesting way. Feed your Labradoodle puppy after all family members have eaten. It is instinctual for the leaders and higher members of a pack to eat first, and the lower ranking members will eat afterwards. This should prevent your Labradoodle from growling or nipping or other displays of aggression at meal times.

Also, the Labradoodle should not be permitted to not nip or bite even at the earliest puppy stage. Experts agree that this behaviour is not a function of teething, but rather an early attempt at dominance. This is also the case for biting hems and pulling socks. This may seem cute when your Labradoodle is a puppy, but once these behaviours are learned and accepted, the fully mature Labradoodle will resist retraining. If your Labradoodle nips or bites, simply close the upper and lower jaws with your fingers, making it uncomfortable for the puppy, but never painful.

Is a Labradoodle Right For You?

The Labradoodle is fun-loving, gentle dog. He has moderate dietary needs and most people can easily manage the exercise and grooming requirements. As a guide dog, the Labradoodle is top-notch and as a faithful companion, you will find no better.

The larger variety of this breed may be too confined in an apartment or condo, but the Miniature Labradoodle, with your commitment to his exercise, should manage comfortably.

As with buying any dog, resist the urge to purchase a dog inexpensively from a pet store or from an advertisement in a newspaper. You may unwittingly buy a mal-adjusted, sick, puppy mill dog. This is to be avoided at all costs.