Known for more than 28 centuries as “the ancient dog of Malta,” the Maltese definitely holds honors as one of the aristocrats of the dog world. Their place in history well documented, it is known that the Maltese has been immortalized in rhyme, as well as art.

It is believed that this unique little breed of dog may have been worshipped by the ancient Egyptians. Century after century, this dainty little dog has been a symbol of outstanding taste, wealth, refinement and cleanliness. Few people meet a Maltese and don’t fall under his spell.

This beautiful little dog can be seen in art objects dating back as far as 3,000 years! The Maltese dog breed’s exact origins are uncertain – they may have obtained their name from the Island of Malta, or from the Italian town of Melita.

Maltese dog fanciers were widespread throughout most of continental Europe, and Maltese dogs were especially popular in Britain during the reign of Queen Elizabeth I (1558-1603), having been brought to Britain at the time of the Roman invasion or by returning Crusaders. The Maltese dog was one of the first of the purebreds to be exhibited at dog shows in North America.

The Maltese dog is believed to be the oldest European Toy breed. Art objects dating back 3,000 years bear likenesses of the dainty little dogs. The Maltese dog was described in writings of 200 BC under the Latin name of Canis Melitaeus, which may refer to the island of Malta or to the Sicilian town of Melita.

From early times, the Maltese dog breed appears to have been known and admired throughout Europe and often had its portrait painted as it lounged on the laps of aristocratic ladies. It was also well known in Britain at the time of Elizabeth I (1558-1603).

Some historians claim the Maltese dog breed was brought by Roman invaders while others theorize returning Crusaders brought the small charmers back as gifts for their ladies. 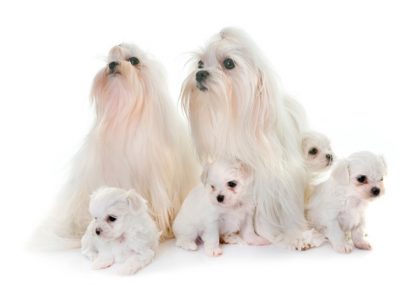 While few realize it, the toy Maltese dog is actually a member of the Spaniel family. Weighing a mere 4-6 pounds as a healthy adult, he is the ideal size for an adorable lap dog and is well-known for his affectionate nature and eager personality.

Covered from head to toe in an abundance of long, white silky hair, the toy Maltese has long held a place in the hearts of celebrities and non-celebrities alike. While he is often jokingly called a dust mop, most find the long coat of the Maltese beautiful to look upon, and their faces being nothing short of angelic.

In addition to his being coveted as an adorable lap dog, the little dog of Malta is commonly said to be one of the hypo-allergenic breeds, ideal for those who cannot tolerate most shedding members of the canine world. The Maltese is considered a non-shedding breed and, due to the likeness of his coat to human hair, the Maltese’s “fur” is always referred to as “hair.”

Most Maltese are outgoing, playful, and friendly, though they must be watched carefully around children, due to the fact that they are very delicate and may be hurt easily. A Maltese has an incredible memory and, following a slight, may become very timid and wary if treated poorly or accidentally harmed. 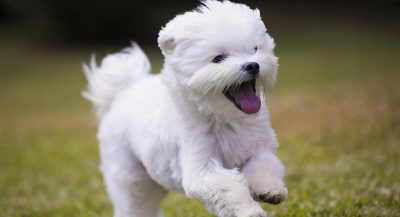 A vigorous canine, the Maltese is always ready for a romp. Its small size makes the Maltese a fine dog for limited accommodations. His exercise needs are minimal.

That lovely Maltese coat needs daily brushing to stay tangle-free and frequent bathing to keep it sparkling white. Most people who have pet Maltese either make frequent trips to the groomers or opt for a short puppy cut that makes caring for the Maltese much easier!

The Maltese is a very sweet and happy breed that enjoys learning tricks for treats. They can be a bit tricky to housebreak, however, so it’s essential to be patient and start them on a routine as soon as you bring your Maltese puppy home. Obedience courses are also a good idea, helping to keep him safe as he learns to behave around other dogs.

Whether you call them Pocket Maltese, Teacup Maltese, Tea Cup Maltese, Toy Maltese, Miniature Maltese, or Mini Maltese, buying the smallest Maltese puppy you can find is a sure recipe for a teacup full of heartache! Responsible breeders occasionally will have a puppy that is smaller than its littermates (it’s what we once referred to as the “runt” of the litter).

Any breeder that selectively breeds to create a smaller and smaller puppy is not a breeder with whom you want to do business. The reason for this is that smaller puppies usually have a number of health problems. They can suffer from Hypoglycemia (dangerously low blood sugar), knee and hip problems, brain defects, kidney problems, heart problems and more.

What’s more, these itty bitty dogs are as delicate as flowers, and can easily be injured or killed by being accidentally stepped on or kicked, or from something as seemingly innocent as a fall off of the sofa or bed. Don’t buy into this unfortunate trend! Dogs are pets – not fashion accessories or toys.

Be sure to buy your Maltese puppy only from a responsible, reputable Maltese breeder. Avoid any breeder who advertises Pocket, Teacup, Miniature, Toy or Mini Maltese puppies. 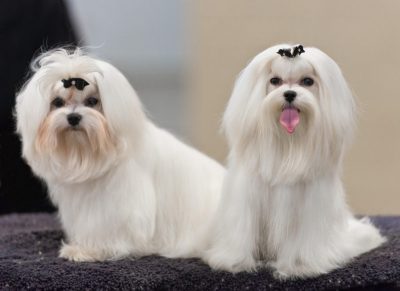 Is a Maltese Dog Right For You?

There are several factors to take into consideration, before rushing out to get a pet Maltese. Will he fit in with your family and other pets? Think carefully before you make a hasty (and often a rather expensive) decision.

Do you have the time commitment to make to a small dog? Maltese are very affectionate little dogs and do not do well, if left alone for long periods of time. They enjoy companionship and affection, and can easily become very lonely and prone to barking, having accidents on the carpet, and showing other symptoms of canine separation anxiety.

While short periods of time alone are fine, it isn’t fair to get a Maltese if you have too hectic a time to be able to pay much attention to a small dog. If your life is that busy, save yourself some money and your little dog some heartbreak and buy a fish instead.

What about your other pets? This should always be taken into consideration, as well. The Maltese, while friendly and rambunctious, is still a delicate little animal and can easily be hurt by larger, more aggressive dogs, or large-breed puppies who have yet to learn their own strength and what not to bite. Provided you are bringing him into a safe environment, however, the little Maltese toy can often fend surprisingly well for himself.

How does the Maltese get along with children? In truth, the Maltese is wonderfully affectionate and he loves almost everyone. The only problem is that, being as small and dainty as he is, he can be easily hurt if squeezed to hard or dropped. Because of this reason, many reputable breeders will refuse to sell a Maltese puppy to anyone who has a small child, under 5 years of age.

Maltese puppies are especially huggable and sweet, but it’s very easy for one to be easily hurt. For this reason, hold off on getting your Maltese puppy until you know that your son or daughter is old enough to realize what hurting is, to know better than to hurt, and can actually help care for the new puppy, rather than just feeding it.

The Maltese is an adorable and sweet little member of the canine world and, if you have the time to properly care for him, will make a wonderful addition to your family. As with adopting any pet, be sure to give it time and thought, as well as making sure to get agreement from all members of the household before bringing home a new puppy.

If you’ve done all this and you know you’re bringing a puppy home to friendly and safe surroundings, then a Maltese puppy may just be the one to steal your heart.