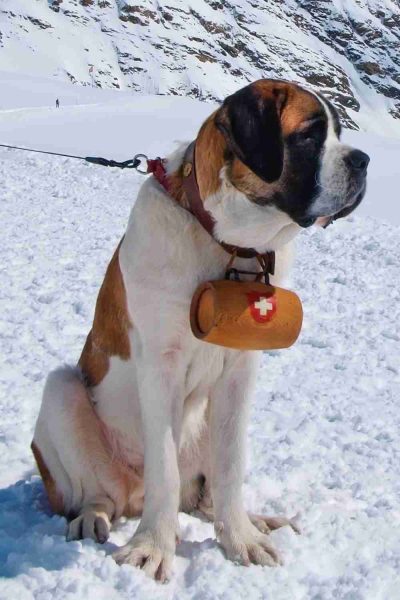 Many stories exist about the noble Saint Bernard and how he traveled through the Swiss Alps discovering stranded and buried individuals who had been caught in avalanches.

They have had movies made about them, cartoons created in their likeness, and yet very little is known how the Saint Bernard came to be.

Nevertheless, even while their past remains a mystery, these giant canines continue to captivate and enthrall as they have for centuries. Are you considering adopting a Saint Bernard into your family? Follow along with these helpful hints to see if a Saint Bernard is the right dog for you: 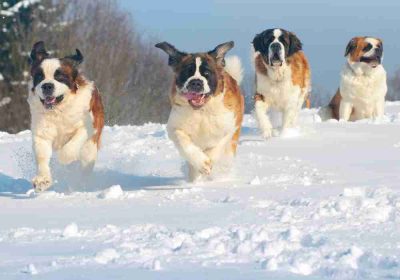 The History of the Saint Bernard

He was not always known as the Saint Bernard, nor did he look the way he does today. The Saint Bernard, like many breeds of dog today, has gone through a great many changes in order to reach the point where he is now.

In fact, many believe that it was the ancient Romans who first had a hand in the creation of the Swiss Saint Bernard. Marching along with the ancient Roman armies was a large breed of Asian dog, known as the “Molosser.” It is believed that he crossed with native Swiss dogs during the various invasions.

The offspring of this unlikely cross were large and quickly put to work in the Alpine dairies and farms, where they were employed as guard dogs, herders, and often performed draft duties as well. They were known by one of two names at this time: the Talhund, meaning “Valley Dog,” or the Bauernhund, which meant “Farm Dog.”

Since the Roman armies invaded as early as the first and second centuries A.D., the breed was well established within Switzerland by the time Archdeacon Bernard de Menthon founded the Hospice in the Swiss Alps, in 1050 A.D.

It’s believed that the Talhund and Bauernhund were first brought to the Hospice somewhere between 1660 and 1670, most likely to serve as watchdogs, as well as providing companionship for the Monks who inhabited this mountain sanctuary. During the winter months, the days seemed unbearably long and the Hospice was almost completely cut off from all of the outside world.

With this isolation, the dogs that were taken into the Hospice were allowed to breed and then inbreed, eventually creating what would come to be known as the “Hospice Dog.”

Not only would the Saint Bernard prove to be a worthy companion animal for the Monks, but it was also discovered that these muscular dogs also possessed an uncanny ability to be able to discover paths in the snow and, with their incredible sense of smell, they were quite adept at finding people who had become lost during storms and avalanches.

Before long, the Monks and their large dogs would be known throughout the world for their ability to save lives. In fact, during the 3 centuries that they have been used as rescue dogs, the Saint Bernard are documented as having saved more than 2,000 human lives. It’s no wonder why they are known as the life-saver dogs. 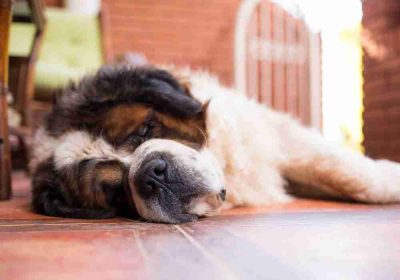 Power is one of the first thoughts that enter the mind when one comes face to face with a Saint Bernard. Bred for sheer size, strength, and intelligence, these are massive dogs that have a very heavy and intimidating appearance. The draft-horses of the canine world, they commonly weigh between 120 to 180 pounds and stand anywhere from 26 to 30 inches tall at the shoulder.

The Saint Bernard comes in two varieties; the shorthair and the longhair. Both types are very similar, save for the fact that the longhaired Saint Bernard had a medium-length coat that is slightly wavy. His tail is bushy, as are his thighs, and he sports a slight feathering of hair along his forelegs.

It is believed that these dogs were developed due to the fact that they were better able to handle the harsh winter weather, while a lot of the shorthaired Saint Bernard dogs did not fair as well. The Saint Bernard can be found in red and white, or white with red, though dark shading over the mask and ears are preferred. 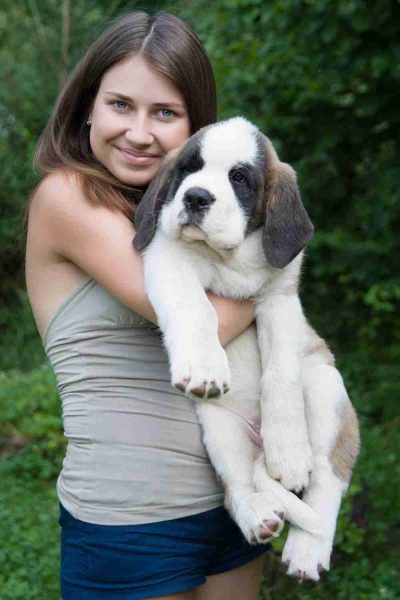 The Saint Bernard is a wonderful family dog and tends to be very laid back as a rule. While his sheer size and intimidating bark are enough to frighten away most ne’er-do-wells, this big and powerful dog is usually quite the loveable teddy bear.

Quite placid, especially when compared to other large-breed dogs, he makes an excellent pet but a poor guard dog unless, of course, his family is threatened. If he feels the need to protect those he loves, he will do so courageously.

It is, however, important to note that some of these dogs have been known to suffer from what is known as “rage syndrome.” Dominant or aggressive behavior can be found in any breed, but with dogs of this size, any sign of aggressive behavior should be discussed with your veterinarian immediately. 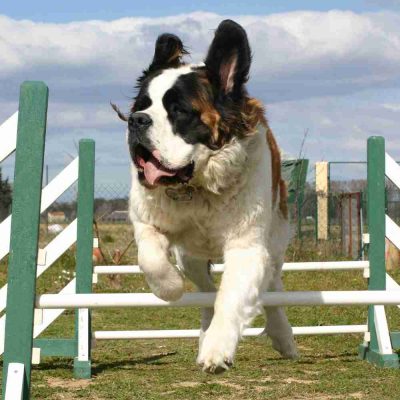 A couple of good daily walks, each day, and he’s happy as a clam, just like any other dog. They also do well in small kennels or dog runs, where they can just roam a bit and stretch their legs from time to time. 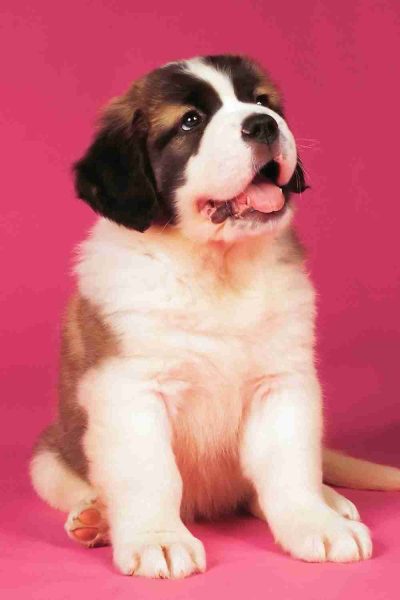 The Saint Bernard commonly sheds his coat in the Spring and once again in the Fall. During the rest of the year, there is little hassle with shedding and a weekly brushing with a stiff bristled brush will help his coat looking sleek and shiny. They rarely require bathing other than once or twice a month and don’t tend to be overly messy dogs, save for some individuals having what is known as a “wet mouth.”

Particular care should be paid to the dog’s eyes and his ears when you groom him, checking for any sign of infection or dirt and debris. A Saint Bernard’s toenails also require regular trimming, same as any other dog. If started as a puppy, these grooming routines will be much easier to perform when your dog is an adult.

Due to the sheer size and mass of the Saint Bernard, it is essential that he be taught obedience lessons and the younger he can start these classes, the better. These dogs tend to grow quickly but mature slow and, before you know it, you may have a puppy that weighs more than a hundred pounds dragging you on a leash or trying to jump up on people. Teach them with patience, love, and do so at a young age. It will be much easier in the long run.

Like any breed of dog, the Saint Bernard is subject to a variety of health concerns. Your best bet is, when deciding to choose a new Saint Bernard puppy, check around with several breeders and ask about the various health issues that can affect these beautiful little dogs.

A reputable breeder should be well-versed in the health concerns and should be able to give you more details, as well as showing you the sire and dam of your potential puppy. Some of the health problems that can affect Saint Bernards include:

Is the Saint Bernard the Right Breed For You? 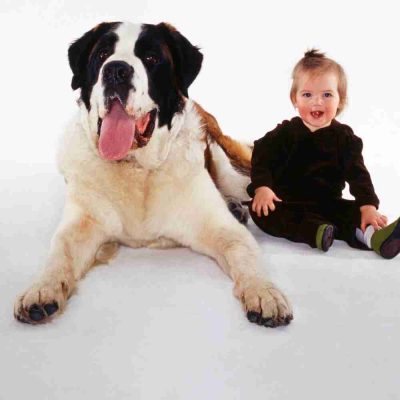 The Saint Bernard is a wonderful and noble animal but, while he is usually very placid and laid back, such a massive canine is not for everyone. While they will not “eat you out of house and home,” as many people commonly believe, they are still large dogs and can make for a crowded house if you don’t have ample room for these giants.

Additionally, Saint Bernard dogs should be carefully supervised with children and other animals; even the kindest and gentlest of dogs can accidentally knock a child down by bumping them or may snap if his tail is pulled. Always supervise these dogs, no matter how capable they appear to be. Protecting your dog is sure to keep him happy and healthy, and that great plumed tail wagging for years to come!

If you know of a Saint Bernard information site that offers unique, quality information and photos of the Saint Bernard breed, please contact us with the URL and a brief description so that our editors can consider it for inclusion in our list below.

Saint Bernards are a very photogenic dog breed. By looking at Saint Bernard pictures, you can usually gain more insight into what these dogs and puppies are like as a breed, and this can help you decide if you really want to become a Saint Bernard owner. The following sites below offer pictures of Saint Bernard dogs, Saint Bernard puppy photos, funny Saint Bernard photos and more. Enjoy

Now that you have decided that the Saint Bernard is the right breed for you, it’s time to start the process of finding a responsible Saint Bernard breeder from which to buy a healthy, well-socialized puppy.

Not all breeders are alike; there are good breeders – and bad breeders. Don’t be in a hurry to buy the first Saint Bernard puppy you find at the cheapest price available! To buy a puppy from a responsible Saint Bernard breeder, you may need to pay more and wait longer.

The additional money and waiting time will be well worth it. Buy a puppy in haste from a newspaper ad, pet store or “backyard breeder”, and you’ll likely also purchase a great deal of additional expense and heartache, since you will likely end up falling in love with a puppy with health and behavioral problems that will likely need special care, plenty of veterinary visits, regular medication – or even euthanasia.

But do your homework and find a responsible, caring Saint Bernard breeder who home-raises their puppies with love, screens their breeding dogs for health problems, offers a health guarantee and post sale support, and who genuinely loves the Saint Bernard breed and is in it for the love of the breed, rather than profit, and you can be fairly well assured of getting a healthy, happy, long lived and affectionate family companion that will provide you and your family with many years of joy, laughter and companionship.

Here are a few breeder directory sites that we recommend. These sites attempt to screen advertisers to ensure that the breeders listed are responsible and sell healthy, home-raised Saint Bernard puppies to carefully screened buyers.

There are many, many sites now online that advertise dog breeders – many are a Mecca for puppy mills and backyard breeders. We recommend that you steer clear of these resources in favor of sites that are more selective in the breeders whom they allow to advertise.

Usually, it’s best to get to know your puppy for a few days or weeks. Often your puppy’s personality will help you decide on just the right name to choose. Does he have a sense of humor? A serious side? A goofy way of cocking his head to one side? A strange love of cantaloupe?

By observing your new Saint Bernard puppy over the first days or weeks, you should at least have a clue about what type of name you want to give. There are a ton of dog names and pet names web sites on the internet. Some are wonderful information resources, while others, unfortunately, are just “garbage” sites set up with the sole purpose of cashing in on visitor hits for this popular subject.

We recommend the following sites to assist you in choosing a name for your new Saint Bernard puppy. These sites offer inventive, unique, original and creative pet names suggestions that have helped thousands of new puppy owners in selecting just the right name for their new baby!