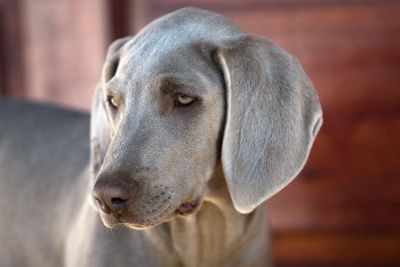 Learn all about Weimaraners, including history, appearance, temperament lifespan, health and care needs, suitability for children and more.

All About Weimaraner Dogs and Puppies

To the untrained eye, the Weimaraner is wrapped in silvery velvet. His lustrous coat and dignified expression hint at his noble lineage. The Weimaraner is a recent breed from strictly-guarded German stock. He was bred for a life of undiluted comfort, both while working as a hunter dog and while relaxing in the comfort of his owner’s home.

Since his arrival in North America in the early 1900’s the Weimaraner has made a name for himself as an affectionate and energetic breed. His popularity as a companion dog continues to grow in North America and throughout Europe.

The Weimaraner is a large breed dog that was originally bred for hunting in the early 19th century. Early Weimaraners were used by royalty for hunting large game such as boar, bear and deer. Wikipedia 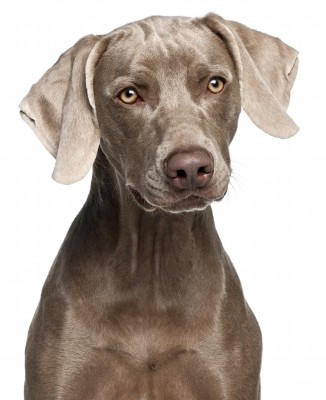 The earliest ancestor of the Weimaraner may be traced back to the 1200’s and the court of Louis IX of France. The theory holds that while the St. Habertus Branchen dogs in the royal kennel were black and quite distinct from the modern Weimaraner, these royal dogs did produce gray offspring and the features of the St. Habertus Brachen were very similar to the that of the Weimaraner. But this theory is unproven.

In nineteenth century Germany, there was a growing demand for a noble looking, all-round gundog. The goal of this early Weimaraner breeding was to develop a versatile dog that could hunt large game like deer, boar and bears. The newly established Weimaraner was bred for nobility so a pack dog he was not.

Unusually, the Weimaraner lived in the family home with all the comforts it provided. This early socialization and interaction with humans lessened the dogs’ willingness to endure Spartan accommodations. But, the Weimaraner was not the common man’s dog. His breed was strictly reserved for nobility and until the 1900’s,  ownership was closely guarded.

The German Weimaraner Club oversaw the progress of the breed and the sale of it’s offspring. Only members of the club were eligible for ownership and becoming a member of this exclusive club was no easy feat. Dogs that were bred outside the purview of the club were ineligible for registration and specimens deemed sub-standard were destroyed.

In 1929 an American gained entry into the German Weimaraner Club and was able to remove two dogs from Germany. These dogs demonstrated such outstanding obedience in competitions, that interest in this breed exploded. So began the rise in popularity of this noble breed and by 1943, the American Kennel Club recognized the Weimaraner as a member to the Sporting Group.

The Weimaraner is an aristocratic breed with refined features and an alert expression. The breed is effortlessly graceful with uncommon endurance so his body is lithe and sleek. These dogs have a very short and uniquely gray coat and high-set, long ears.

The haunting eyes of the Weimaraner are light in color and can be light amber, gray or blue-gray. The tail is customarily docked to six inches. 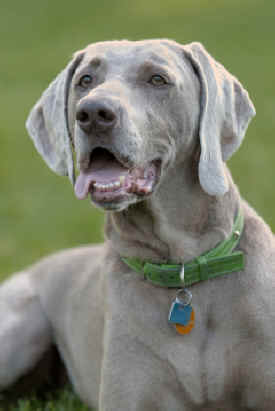 The Weimaraner is a rowdy and rambunctious dog whose energy needs to be directed. The dog will crave interaction and affection from his family, so much so that he can suffer extreme separation anxiety if he cannot have it.

This anxiety can manifest in unusual drooling, chewing and unexplained injuries like chipped teeth and bleeding lips. A veterinarian can prescribe anti-anxiety tablets, but your Weimaraner may resist both the medication and behavior modification intended to curb the problem.

For this reason, your Weimaraner cannot be isolated from his family for more than a couple of hours at a time. Kenneling your dog during your family vacation is ill-advised. Instead, try leaving him with a neighbor who is well known to your dog. Still, he will suffer during your absence.

The Weimaraner is a hunting dog whose instinct will dominate his exercise routine. If an unsuspecting feline wanders into his path, the cat is as good as dead. The Weimaraner has little sympathy for small and furry creatures. He will actively hunt and ultimately destroy any creature he deems as prey.

At times, the Weimaraner can flirt with crime and unscrupulously steal food from the table and from countertops. It will be difficult to curb this through training, as the breed sees the fruits of his labor as legitimate hunting windfall .

Although the Weimaraner is affectionate and loving, sometimes his boisterous play can overpower small children. Your dog may jump on a toddler without regard for the child’s unsteady legs.

If you have decided to train for a marathon and need a tireless companion, the Weimaraner is the breed for you. These dogs need long walks and daily runs of 3 to 5 miles and will happily go further if your legs can stand it. The thing to remember is that the Weimaraner is a hunting dog and while walking is enjoyable for this breed, he needs to run and run and run.

Without sufficient exercise, he can act out inappropriately. The Weimaraner has an alarming penchant for destruction that can be brought on if your dog has excess energy to burn. This time and energy can be spent chewing table legs, wrestling his way into cupboards and finding calamitous uses for toothpaste.

Grooming your Weimaraner is a snap. Just brush him weekly to remove dead hair and all will be well. Care of teeth and ears is also necessary, along with nail trimming. Your breeder or veterinarian can show you how to complete these grooming tasks – essential to ensuring your dog’s health and well-being.

There is no denying that a Weimaraner needs crate training and early socialization but this is only the beginning. He needs a firm but consistent hand and an owner who is willing to leave nothing open and available to be gotten into.

An uncanny sense of smell and penchant for adventure will lead your Weim to empty the entire contents of the garbage can in pursuit of some tasty morsel at the bottom. So, training is one thing – but making your home Weimaraner-proof is another matter. Be sure that your yard is fenced well beyond what seems necessary as your Weimaraner can leap higher than one might reasonably expect.

And, the kitchen is an especially popular area for Weimaraner investigation. With cunning dexterity, your dog will learn to open the fridge, liberate biscuits from jars and track spilt, now-mucky flour into your bed. There is no training this away. Just cling tenaciously to the knowledge that this destruction will lessen as your Weimaraner grows older and as you learn to outfox your dog.

Some common health concerns for your Weimaraner include:

Also of note:  The Weimaraner is especially prone to gastric torsion. This painful and life-threatening disorder is most common in deep-chested breeds. Gastric torsion occurs when the stomach twists itself thereby preventing food from digesting.

Symptoms include obvious discomfort, lack of bowel movements and swollen stomach. If you suspect your Weimaraner has gastric torsion, seek veterinary assistance immediately. This disorder can be corrected only through surgery and only if diagnosed early.

There are special bowls designed for gobbling dogs and purchasing one for your Weimaraner is highly recommended. Finally, owners are encouraged to know the signs and symptoms of gastric torsion and to have emergency numbers ready.

Is a Weimaraner Right For You?

The Weimaraner is a ball of energy that is matched only by his devotion to his family. And, if his family are Olympians, all the better. In truth, the ideal owner is active and athletic, with plenty of time to devote to this dog. In this perfect scenario, children are tall enough to withstand the weight of the Weimaraner’s affectionate leap and old enough to assume some of the exercise responsibility.

The Weimaraner is gentle but demanding of affection, so families with hectic schedules may not be well suited. Seniors too may find the grooming a breeze, but the exercise requirements impossible. If your family’s idea of exercise is running to the kitchen for chips between episodes on NetFlix, get yourselves a Pug (or abandon your lazy ways and get a Weimaraner). If you are domestically well-suited and looking to explore the great-outdoors, the Weimaraner makes a splendid choice.