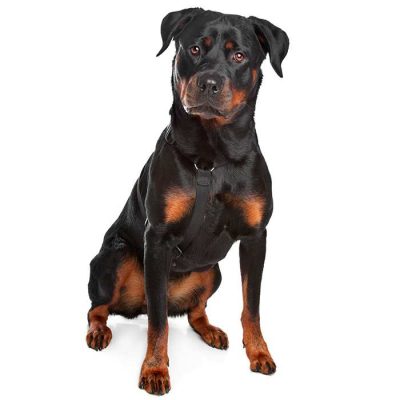 Rottweilers are very robust and beautiful dogs. Powerful and fiercely loyal, they are believed to have ties back to the ancient Romans, where their ancestors helped to drive cattle on the long war marches. Today’s Rottweiler no longer drives cattle, but has instead become a favored companion animal, particularly in the United States.

Owning a Rottweiler requires a great commitment and a lot of responsibility, however, and it’s important to research this breed, and your individual dog, very carefully.

The Rottweiler is the epitome of sheer, raw power. A medium-to-large dog, he is built for strength and endurance, as well as being surprisingly agile for his size.

Slightly longer than they are tall, Rottweilers possess a massive bone structure and are built, not only to take a blow or kick from agitated cattle, but also to be able to powerfully leap and dodge incoming attacks. Sadly, this also made them a favorite of those who would breed dogs for the inhumane practice of dog fighting.

These massively-built dogs are generally very loving and doting, in regards to their family. While they tend to be very loyal and territorial, unethical breeders have either sought to emphasize this quality in the breed or didn’t bother considering temperament prior to breeding, and the result has been a rash of poor quality Rottweilers being sold to the general public.

Dogs that exhibit extreme aggressiveness, shyness, nervousness, or are overly jumpy should not be bred, nor should they be considered a suitable pet. A good Rottweiler is friendly, dependable and often tends to have a clowning personality, that strives to please and amuse his owner.

Rottweilers, especially puppies and young dogs, need a substantial amount of exercise. Ideally, they should have access to a sturdy-fenced yard, though they can also benefit from long walks or jogging excursions with their owners, and most Rottweilers enjoy visiting the local dog parks.

Many people who own Rottweilers find that obedience and endurance classes are a great deal of fun, for both dogs and owners alike. Rottweilers love to find exercise in any way that they can – this can include climbing or jumping fences or, if left alone and without ample exercise, can also turn to more destructive methods of entertainment.

The Rottweiler is easy to groom and take care of. While you may get a few stray hairs, here and there, he generally only sheds twice a year; in spring and in fall. Because of this, merely brushing him once or twice a week, gently using a soft-bristled brush, can give his coat a nice shine and your Rottweiler in a beautiful and shiny coat.

Trimming his nails is also an important step in dog grooming, and should be started when he is young and can be taught to stand obediently for tasks, such as toenail clipping.

The Rottweiler grows into a big and powerful dog, very quickly, so it is essential to establish control and teach him basic obedience while he is still a puppy. Be forewarned that this dog is extremely intelligent and crafty, and can often exhibit a great deal of stubbornness.

Much like when dealing with a child, you must set rules for this dog to follow and, if he disobeys, you should not let it slip or ignore such behavior. Fortunately, with most, a few stern words will suffice, if he knows he has displeased his beloved human.

Rottweilers can be very playful and fun-loving, but when it is a dog that weighs over 100 pounds that’s bouncing around the living room, it’s fairly easy to see where there can be problems. Remember that the Rottweiler does not care about the good china, nor does he seem to realize his own size and power.

For this reason, it is not advisable that an elderly person take on a Rottie as a pet, nor should they be left alone with small children. Not only is there a risk of a dog bite occurring, but your happy-go-lucky Rottweiler puppy can easily knock a small or delicate person down.